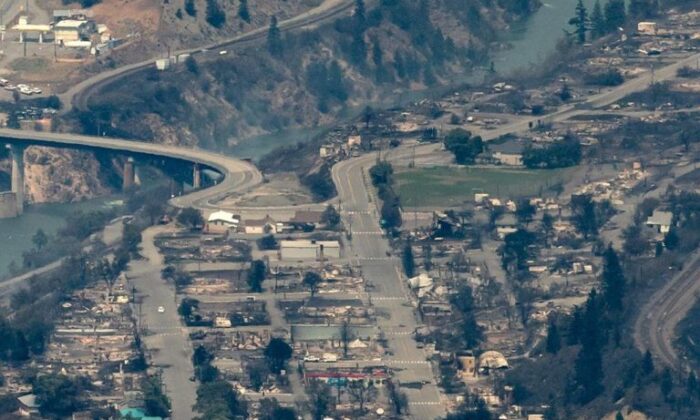 Structures destroyed by wildfire are seen in Lytton, B.C., on July 1, 2021. (The Canadian Press/Darryl Dyck)
Canada

Some Lytton, B.C., Residents Still Unaccounted for After Wildfire Evacuation

LYTTON, B.C.—The search continues today for multiple residents of a village in British Columbia’s Interior that was decimated by a wildfire this week.

Public Safety Minister Mike Farnworth hasn’t said how many people from the Lytton, B.C., area are unaccounted for.

He says it’s been hard to keep tabs on where everyone ended up given the urgent nature of Wednesday evening’s evacuation.

Officials say it’s unclear whether anyone remains in the village due to a lack of cell service.

RCMP say details about conditions in the village are scant because it’s not safe to enter the area, but aerial photos show that numerous buildings and vehicles have been destroyed.

They say they’ll begin searching for missing or injured people on the ground as soon as it’s safe to do so.

Farnworth has said that the roughly 1,000 people who managed to flee to safety when the emergency evacuation order was issued will find very little left when they return.

The fire ignited during weather that produced several lightning strikes.

Fire Department platoon captain Troy Grant didn’t have an exact number but said some 200 people in the Juniper Ridge neighbourhood had been evacuated as the fast moving fire advanced toward the area.

Grant said local crews were being heavily taxed battling the fire but he was not aware of any structures being burned or any injuries among residents.

The BC Wildfire Service says there are now at least 106 fires burning across the province, including dozens that started within just the past two days.