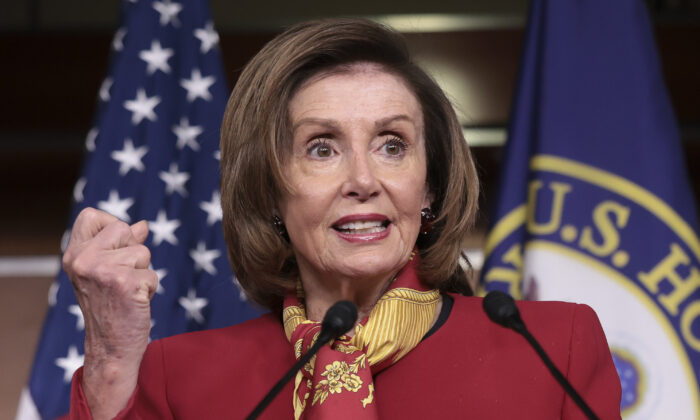 Speaker of the House Nancy Pelosi (D-Calif.) answers questions during a press conference at the U.S. Capitol in Washington on Feb. 9, 2022. (Win McNamee/Getty Images)
Democrats

A coalition of House Democrats are joining with House Republicans to protest Speaker of the House Nancy Pelosi’s (D-Calif.) mask mandate, which has been mandated for all House members since the start of the CCP (Chinese Communist Party) virus.

The rule, introduced as House Resolution 38 (H.R. 38), directs the House Sergeant-at-Arms “to impose a $500 fine for a first offense and a $2,500 fine for any subsequent offense against a Member, Delegate, or the Resident Commissioner for failure to wear a mask in contravention of the Speaker’s announced policies of January 4, 2021.”

Pelosi had earlier put the mandate in place for all members, but H.R. 38 cemented the speaker’s diktat as a finable offense; fines are withdrawn from members’ paychecks.

The H.R. 38 mandate was eventually relaxed a bit, but following the rise of the Delta variant of the CCP virus, Pelosi again made the decision to require members of the House to wear a mask inside the Capitol.

After the new mandate was announced in July, McCarthy in a tweet condemned the decision to reimpose mask mandates.

“Make no mistake—The threat of bringing masks back is not a decision based on science, but a decision conjured up by liberal government officials who want to continue to live in a perpetual pandemic state,” McCarthy wrote.

Democrats have largely walked in lockstep with Democrat leaders over CCP virus issues, but some are now signaling that they are open to ending the House mask mandate.

The defection is driven in part by the recent decisions of several Democrat governors across the country to end mask mandates in their own states, one defector, Rep. Sean Patrick Maloney (D-N.Y.), made clear in a tweet.

“I fully support the decision to roll back mask mandates,” Maloney said in a thread responding to NY Governor Kathy Hochul ending the mask mandate for New Yorkers.

“Now, it’s time to give people their lives back,” he judged.

“We follow the science and our medical advisers, but I think the time [to end the mandate] will come sooner rather than later,” Kildee told Politico.

He added, “I wish more of my colleagues were vaccinated, but … I think we will have to modify our approach to the pandemic as it changes.

Rep. Susan Wild (D-Pa.), who sits one the House Ethics Committee—the main enforcement arm of the mandate—also suggested that the mandate should end.

“The Ethics Committee has sadly been turned into the mask police, and we’re spending way too much time on mask violation issues,” Wild said. “When we come back [from recess] … in early March, unless there’s been some new strain or variant, I think it’s time to get rid of the masked mandate.”

The mandate has been extremely controversial among Republicans—and none have fought it more strongly than Reps. Marjorie Taylor Greene (R-Ga.) and Andrew Clyde (R-Ga.), who have both had more than $100,000 docked from their pay for violations.

“Over the past year and a half, communist Democrats have ruled our country as tyrannical dictators with mandates and lock downs,” Greene said. “Now, the American people have had enough and are standing up against these outrageous and unconstitutional policies.”

Greene also made clear that she wouldn’t change her behavior in accordance with Pelosi’s rule any time soon.

“I will continue my stand on the House floor against authoritarian Democrat mandates, because I don’t want the American people to stand alone,” Green vowed.

One Republican, Rep. Bob Good (R-Va.) argued in an appeal that the mask mandates were unconstitutional inasmuch as they made changes to members’ pay during the same Congress, which is forbidden under the U.S. Constitution, and the argument has gained significant traction among Republicans.

However, because Pelosi has a near monopoly on deciding what can and cannot come to the floor, her acquiescence will be required for any effort to end the rule.

Even if the mask mandate is ended, other controversial CCP virus rules may remain in effect.

For instance, a separate resolution instituted the practice of proxy voting, which allows members to cast votes for other members who are not present. Republicans, in addition to libertarian-leaning Rep. Justin Amash (I-Mich.) and three Democrats, unanimously opposed the measure when it was first brought to the floor.

Democrats dominated the system in 2021, casting 72.5 percent of all proxy votes.

While Republicans have promised to end the rule if they take back the majority, Democrats have given no indication that they plan to lift the measure any time soon.