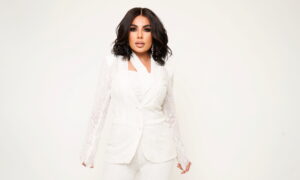 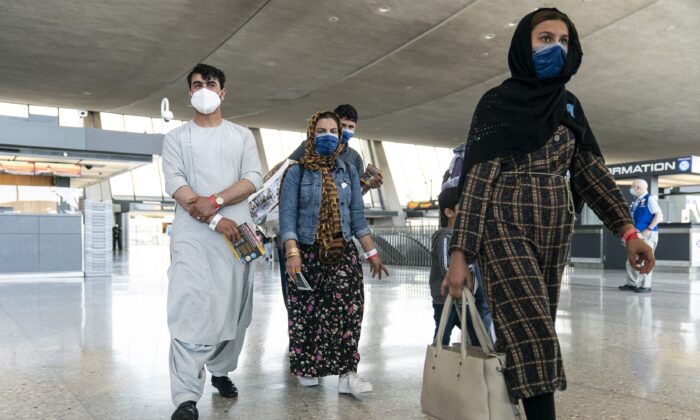 Afghan families walk to a bus that will take them to a refugee processing center at Dulles International Airport in Dulles, Va., on Aug. 24, 2021. (Joshua Roberts/Getty Images)
US News

Some Afghans Being Let Into US Without Visas: Official

Some Afghan nationals are being allowed to enter the United States without visas, a senior Biden administration official said on Aug. 24.

The unusual arrangement is being enabled by Department of Homeland Security (DHS) Secretary Alejandro Mayorkas, who is granting “humanitarian parole” to the Afghans without visas, the official said.

The designation is granted to foreign nationals “for urgent humanitarian reasons or significant public benefit,” according to the Immigration and Nationality Act.

Some Afghans have been granted Special Immigrant Visas (SIVs) before being flown to the United States, the official told reporters in a call.

“In other instances, the secretary of Homeland Security is using his parole authority, including his ability to impose particular conditions of parole on those arriving to ensure that those who are reaching here are doing so obviously with appropriate legal status,” the official said.

The parole is being granted to Afghans who have applied for SIVs but who haven’t yet been granted visas. The official declined to answer when asked if the parole was being used for people who haven’t applied for an SIV.

“But I will say that that authority—that parole authority—is one that provides some flexibility for individuals for whom there is not a relevant legal status, and, in appropriate cases where people pass the security check I mentioned, that parole authority … is one of the things in play here as people enter the United States,” the official said.

Officials say every Afghan being flown to the United States is being screened.

DHS and the State Department didn’t respond to requests for more information.

Thousands of Afghans are being evacuated from the U.S.-held airport in Kabul to third countries including Germany before landing in the United States, following the Taliban’s takeover of Afghanistan.

Many are getting SIVs for having helped the United States during its 20-year mission in the country. Others are deemed vulnerable to persecution by the Taliban if they remain in their homeland.

Through March, almost 100,000 people from Iraq and Afghanistan were granted SIVs. It isn’t clear how many visas are left under the program, which was expanded twice by Congress within the last year. Military officials are preparing space at four bases to temporarily house 25,000 Afghans.

The United States has used the same parole authority in the past, including paroling 130,000 Vietnamese in April 1975, according to historian Amanda Demmer.

“Parole does not confer a visa/immigration status, which will need to be sorted out thereafter,” she wrote on Twitter.

A group of 46 senators, mostly Democrats, asked Mayorkas and Secretary of State Antony Blinken last week (pdf) to create a humanitarian parole category for women leaders, activists, judges, and others from Afghanistan “to streamline the paperwork process to facilitate referrals to allow for fast, humane, and efficient relocation to the United States.”

The International Refugee Assistance Project, which advocates for immigrants, in April recommended that the Biden administration utilize “large-scale parole” to admit huge numbers of Afghans, “who can then apply for various pathways to permanent status, such as asylum or an SIV.”

Others, though, have called for a slowdown on the number of Afghans being let into the United States, through parole or otherwise.

“There must be a limit to the United States’ capacity (not to mention will) to admit people in need,” Nayla Rush, a senior researcher at the Center for Immigration Studies, wrote in a blog post on Aug. 24.