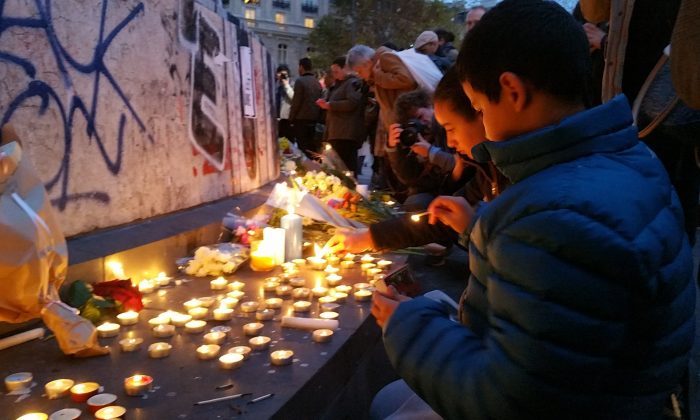 The Monument at the Place de la République in Paris, became a gathering point for people honoring the victims of the deadly terrorist attacks that tore through Paris the previous night, on Nov. 14, 2015. (David Vives/Epoch Times)
Europe

Somber Silence After Paris Attacks: ‘November 13 will be France’s September 11’

PARIS—The Parisian sky was gray above the Place de la République on Saturday. A silent crowd circulated around the large monument in the center of the square with its three statues representing Liberty, Equality, and Fraternity. All came to pray and honor the victims of the horrific attacks that left 129 people dead Friday night in the capital.

But throughout the day on Nov. 14, the square never emptied. People continued to approach the statues; others stood further away, staring into the horizon. The collection of messages of support, candles, and flowers multiplied throughout the day of quiet contemplation.

Around 4 p.m. local time, a teenager tried to light candles, as many had before her; but the the strong wind systematically blew out each attempt.

“We need to speak to each other in these times, it’s important,” said Daniel, 75. “When they call to close everything down, as the authorities have, it’s the psychosis of fear, it proves them right, that they can continue to scare us.”

‘Given the scale of the tragedy, Daniel said it feels like it’s back “behind the barricades” like in the days of the resistance during the second World War, or the civil unrest of May 1968.

“For now, we light a candle. For now, it is hard, we do not know what to say … except that God welcomes them,” said one passerby.

“I was at both locations of these attacks—it’s terrible. … I have the impression that it awakened something in us, like before it was hard to differentiate between fiction and reality. … Now we realize that the war is real.”

Later, more and more people gathered around the statues in silence and somber reflection punctuated by flashes from photographers. At one point, a child came forward and patiently relit a dozen candles blown out by the wind.

On Sunday the mood was tenser. At one point a firecracker went off near the square, sending the crowd into a panic with people screaming and running away from the sound.

A 23-year-old California college student, Nohemi Gonzalez, was killed in the terrorist attacks.

A senior studying design at California State University, Long Beach, Gonzalez was at a Paris restaurant with fellow students when she was fatally shot Friday.

Gonzalez was taking part in an exchange program at the Strate College of Design in France.

Her stepfather, Jose Hernandez, said as the news in Paris broke, he began receiving panicked texts from Nohemi’s boyfriend in California, who said he couldn’t get in touch with her.

“I replied and I said, ‘well don’t worry it’s OK.’ I tried to calm him down,” Hernandez said at the Los Angeles County barbershop where he works.

But then the FBI arrived at their door and their worst fears were confirmed.

One of her Long Beach schoolmates in Paris saw Gonzalez get shot, but she was able to escape from Le Petit Cambodge restaurant. She told school officials she saw her friend carried away on a stretcher.

“I and the entire campus are heartbroken to share this terrible news,” said Jane Close Conoley, president of the university.

“Nohemi was something of a star in our department,” LaForte said. “She was a shining star, and she brought joy, happiness, laughter to everybody she worked with and her students, her classmates. She functioned like a bit of a mentor to younger students.”

Read original article in French. The Associated Press contributed to this report.