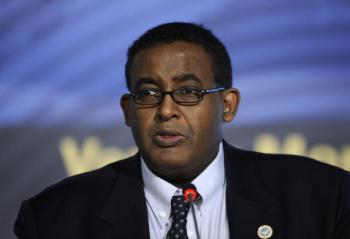 “I have resigned to end the dispute within the government, and in order for something to be done about the situation in the country,” Sharmake told reporters at a news conference at the presidential palace in Mogadishu, according to a report by the Garowe news agency.

According to reported diplomatic sources, political tensions had led to a strengthening of Islamist insurgency forces.

The internal divisions have crippled the TGF’s ability to carry out its essential tasks, said Augustine Mahiga, the U.N. secretary-general’s special representative for Somalia, in a U.N. report.

“I call on all those who support peace and security to demonstrate that they can work together in a cohesive manner,” said Mahiga on Tuesday, noting that there is less than a year before the end of the TFG’s mandate in August 2011.

The TFG, recognized by the U.N. and members of the international community including the African Union and the United States, was established in 2004 after a two-year-long peace process.

In 2008, under a peace agreement signed in the neighboring country of Djibouti, former adversaries participated in the temporary government. Ahmed and Sharmake took their seats in that government in 2009.

Due to internal struggles since that time, control over south and central Somalia went in large part into the hands of Islamic militants.

The TGF has the protection of African Union troops and needs to further initiatives on reconciliation, building civilian and security institutions, and completing the constitution-making process by the end of the TFG’s mandate, Mahiga said.

“The international community and the Somali people are looking to their leaders for unity, not recurrent political crises, and there should be no excuses for stalling the peace process in Somalia,” said Mahiga.

President Ahmed is expected to address the U.N. General Assembly during a special session on Somalia this week in New York.