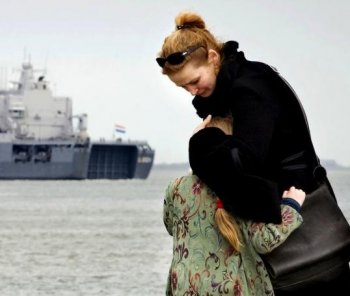 UNCERTAINTY: A young girl is comforted by her mother as the Dutch marine vessel Hr.Ms. Johan de Witt where her father is serving, leaves from the harbor of Den Helder on April 5. The ship has been sent to patrol as part of the E.U. counterpiracy mission off the coast of Somalia. (Robin Van Longkhuijsen/Getty Images )
World

Ekaterina Popova
View profile
Follow
biggersmaller
Print
Warships from more than 10 countries were sent to patrol the Gulf of Aden—the only place that leads to and from the Suez Canal and connects the Indian Ocean with the Mediterranean Sea.

Although the 15-nautical-mile corridor at the Gulf of Aden is protected from pirates by warships from countries including the United States, Canada, and Russia, areas on the outside remain vulnerable to attack, according to Bulgarian navigation officer Ivan Zhelyazkov.

To avert any run-ins with the international navy, Somali pirates have switched their area of operations, which now stretches as far as the Seychelles Islands. When the pirates began their attacks years ago, the international navy was advised to keep a distance of 200 miles when passing along the coast of Somalia. The distance later grew to 500 miles, and then to the current 1,000 miles, said Zhelyazkov.

Close to 30 percent of the world’s oil is transported through the Gulf of Aden, annually, and an estimated 16,000 vessels pass through, according to official statistics cited by the leading Bulgarian economic weekly, Capital.

Each ship for the pirates is seen as a fortune waiting to be grabbed. Little regard is often paid to what the ship carries, as in most cases, the ransom is where the money comes from. Ransoms typically paid by ship owners can vary anywhere between $300,000 and $6 million.

The Rise of Piracy

The Gulf of Aden is not the only area in the world where ships are at risk of pirate attacks. Also critical are the narrow Strait of Malacca in the Indian Ocean, and the Caribbean region in the Atlantic Ocean.

Aside from the Gulf of Aden, the most threatened areas are off the coasts of Nigeria, the Philippines, and Indonesia, although the rate of successful attacks is not very high. Typically, vessels are robbed, but the crew and ship are often left alone, according to Zhelyazkov.

Piracy tends to be more prevalent in countries with higher poverty rates, and where local authorities have little power, according to Zhelyazkov. This has become an impeding factor in thwarting piracy through the use of force.

In Somalia, where there is little governance and poverty is rampant, the problem of piracy is more pronounced. The country is divided into various tribes.

Individuals in the freight business are of the theory that the most effective solution in halting piracy off the Somali coast is to stabilize the situation in the country, where civil conflict has raged for 18 years.

Somalia fell into anarchy after its former dictator, Mohamed Siad Barre, was overthrown in 1991. This gave way to Asian and European ships poaching and dumping industrial waste in Somali waters.

Ahmedou Ould-Abdallah, the U.N. secretary-general’s special representative to Somalia, said in an interview with the London Independent that the 9 million people in Somalia began to starve in the years following their civil war. Disease spread along the coasts, people began getting strange rashes, and birth defects became more common.

A tsunami in 2005 pulled up toxic barrels from the waters and threw them across the coastal cities. Many people became ill, and hundreds died.

“Somebody is dumping nuclear material here. There is also lead, and heavy metals such as cadmium and mercury—you name it,” Ould-Abdallah said, adding that widespread poaching in Somali waters has caused many people in Somalia to die of starvation.

Poaching and dumping of toxic waste by foreign ships spurred local fishermen and fighters to form groups called the “Somali Coastal Guards” and “National Voluntary Coastal Guards” to drive away or detain ships from countries including South Korea, Italy, Spain, and Thailand, according to Bulgarian news website Vesti.bg.

It soon became clear to them how easy it was to abduct a ship. The groups then began forming pirate gangs and expanded their operations, improving their skills with each ship they captured.

A movie series by Bulgarian National Television was the first that managed to film cadres in the pirate town Eyl. The film reveals that the alleged “peaceful life” in Somalia is only a smokescreen.

The moviemakers begin their film in Bussaso, the largest port city in Somalia, where pirates buy weapons, satellite telephones, boats, and other equipment for their attacks.

The movie concentrates on the pirates themselves—their way of life, their families, and the reason why ordinary fishermen and even adolescents living in extreme poverty would join the pirate groups. “Being a pirate is like a promotion for an ordinary fisherman,” a novice in the pirate business told the journalists.