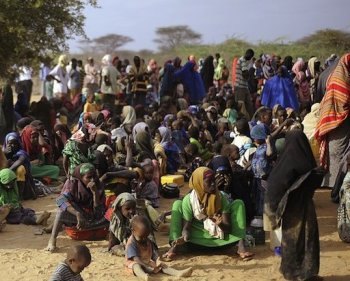 Somali refugees line-up to be registered to receive aid after having been displaced from their homes in southern Somalia by a famine that is ravaging the horn of Africa, on August 2, at Dagahaley refugee site. (Tony Karumba/Getty Images)
Africa

The situation in these three areas has exceeded the requirements to be declared a famine using the Integrated Phase Classification scale, stated Food Security and Nutrition Analysis Unit (FSNAU), the unit of the U.N. in charge of food security in Somalia.

The definition of famine includes at least 20 percent of the population having “limited access to basic food requirements,” widespread mal-nutrition of at least 30 percent, and a mortality rate of at least 2 per 10,000 people a day.

In some parts of the newly declared famine hit areas, “10 percent of children under five [are] dying every 11 weeks,” said FSNAU.

FSNAU states that it expects all of southern Somalia will be struck by the famine in the coming four to six weeks, and that the famine is “likely to persist until December 2011.”

Factors that led to the current famine in Somalia include the ongoing drought that began several months earlier, the inflation of prices for basic food products, and the difficulty in providing aid to areas, particularly in the south, controlled by al-Qaeda-linked al-Shabab militants. In the absence of a functioning central government al-Shabab essentially controls the area and has made it very difficult for aid organizations to operate.

Another concern about the famine in southern Somalia is that without proper assistance, disease outbreaks may spike mortality rates, similar to the last Somalia famine in 1991-1992, said FSNAU.