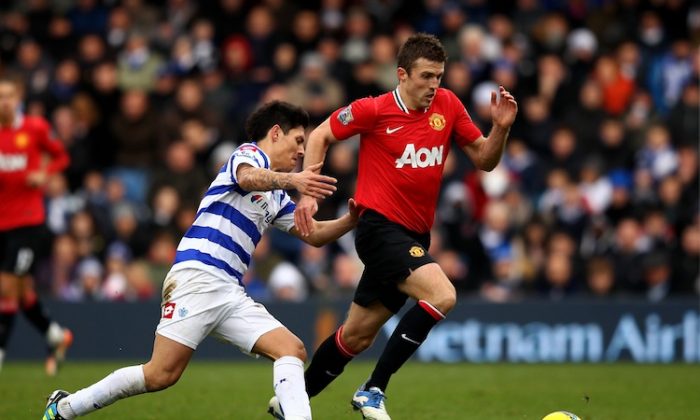 With the Champions League nightmare slowly fading, Manchester United celebrated Sir Alex Ferguson’s 750th Premier League game in charge with a solid 2–0 win away to Queens Park Rangers in Sunday’s early fixture. The Red Devils took over top spot in the Premier League pending the match between Manchester City and Arsenal later in the day.

It was a thoroughly professional performance with the result never really in doubt after Wayne Rooney had given the champions a dream start after only 52 seconds. The points were made safe 11 minutes into the second half thanks to a sparkling solo effort from Michael Carrick.

This was the first Premier League meeting of these two clubs for 15 years. Rangers played the first four years in the Premier League after its inception before being relegated. Then, it was a long wait for the Loftus Road fans until Neil Warnock delivered promotion in his first full season in charge.

Anton Ferdinand was absent through injury and so there would be no facing off of the two Ferdinand brothers. Matthew Connolly came into the center of the QPR defense as Ferdinand’s replacement. Meanwhile, with Nemanja Vidic out for the season, much will be expected of Rio Ferdinand.

United took the lead with the very first attack of the game. Chris Smalling, selected to fill the right back position, headed down for Rooney who played the ball out to Antonio Valencia on the right. The Ecuador international duly returned the favor with his useful cross picking out Rooney whose glancing header found the back of the net.

It was a perfect start, but the lead could have been doubled two minutes later when Nani played in Danny Welbeck. However, third-choice QPR keeper Radek Cerny made a smart block to deny the United striker.

QPR skipper and former Manchester City favorite Joey Barton would certainly not allow capitulation to the old enemy without a scrap, and drove his troops forward by winning a couple of corners. One of these, taken by Barton himself, found Heidar Helguson unmarked on the penalty spot, but the Icelandic international directed his header over the top.

It would be one of only three clear chances QPR would get, and if they are going to have any chance of taking points off the top teams in this league such chances absolutely must be taken.

Back at the other end, Danny Welbeck had the ball in the net but was adjudged offside. However, the replay suggested the referee’s assistant may have been a little too quick to raise his flag; the decision being marginal at best, with Welbeck justifiably feeling hard done by.

United had four more great chances in as many minutes but Cerny, with a little help from the frame of the goal, somehow kept his side down by only one goal.

Rangers continued to take advantage of any breaks that came their way, with Jamie Mackie in particular looking dangerous down the right and giving Patrice Evra a more uncomfortable afternoon than the Frenchman had probably expected.

The team from West London did have one more opportunity before the break but a wrong-footed David De Gea managed to scramble the ball away with his left boot in ungainly but effective fashion.

Three Points in the Bag

The three points were made safe for United on 56 minutes. Frequently underrated, Michael Carrick has looked highly impressive since returning to the starting XI, and this was another man of the match performance in midfield.

If there is any justifiable criticism of Carrick down the years it would be with regard to his goal return. He had not scored for 70 games since February 2010 but this one was well worth waiting for.

Carrick collected the ball just inside his own half and set off towards the opposing goal. He glided past three or four defenders with ease, gained the edge of the area and fired a crisp low shot past Cerny. The keeper did get his fingers to it but could not prevent the inevitable.

It was only Carrick’s 18th goal for United and the fans will be hoping they do not have to wait so long for his next one.

Welbeck and Phil Jones could both have extended the visitors’ lead but were denied by Cerny and the upright respectively. On 75 minutes, Rangers’ best chance fell to substitute D.J. Campbell who contrived to put the ball over the top from close range when it would have been easier to score.

A goal to the home side at that point might have made for intriguing last quarter of an hour but it was not to be.

For all the talk of crisis, United actually have more points than they had at the same time last year and, on this showing still appear a force to be reckoned with, at least on the domestic front.

QPR will need to seriously address their poor home form if they are to survive in this league.