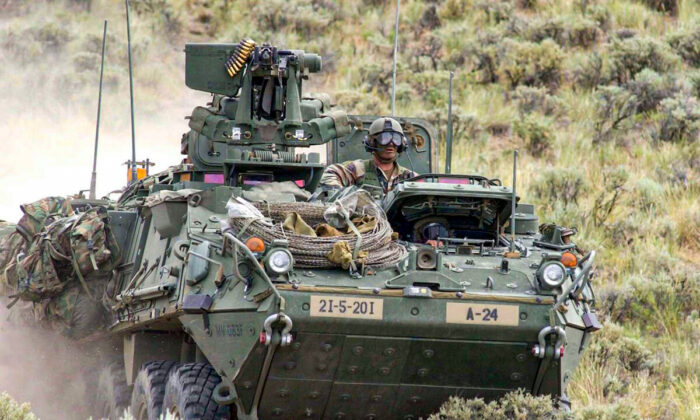 A Stryker vehicle from the U.S. Army's Company A, 5th Battalion, 20th Infantry Regiment, returns to base camp at the Yakima Training Center in Yakima, Washington in this undated photo. A 20-year-old soldier was killed in a “vehicle accident” at the training center on April 25, 2022. (General Dynamics/Getty Images)
US News

Soldier Killed, 2 Others Hurt in Vehicle Accident in Washington State

A 20-year-old soldier was killed and two others injured during a unit exercise at the Yakima Training Center in central Washington state, officials said.

Army Pfc. Joseph A. Marquez, of Dover, Delaware, died on April 25 after a “vehicle accident” at the training center, the 8th Squadron, 1st Cavalry Regiment, said in a statement released on social media.

He was pronounced dead at the scene.

“It is with a very heavy heart and incredible sadness that the Blackhawk Squadron announces the passing of one of our own PFC Joseph Alejandro Marquez,” the regiment said, noting that he joined the army last year.

”Marquez was known for his laughter and the light he spread everywhere he went. We knew him as a loving son and brother to his family, a faithful friend to his comrades, and a loyal Soldier to his nation,” the statement said.

“He was and is so loved, and already so missed,” officials said.

The regiment said that it will soon share details of Marquez’s memorial service.

“Please respect the unit and the family as we grieve our loss,” the press release added.

Marquez was a member of the 2-2 Stryker Brigade Combat Team of the 7th Infantry Division based at Joint Base Lewis-McChord (JBLM) in western Washington.

The Yakima Training Center is a satellite installation of JBLM.

“We are deeply saddened by the loss of Pfc. Marquez,” said Lt. Col. Michael Filanowski, commander of 8th Squadron, 1st Cavalry Regiment. “Blackhawk Squadron sends its deepest condolences to his family and loved ones. Our prayers and thoughts are with them during this difficult time.”

The injured soldiers were treated at Yakima Valley Memorial Hospital and released, officials said. The military did not release their names.

It is unclear what vehicle was involved in the fatal incident, and whether he was driving at the time. The cause of the incident is under investigation.

The U.S. Army said it studies every “soldier mishap fatality” to determine ways to prevent similar incidents from occurring in the future, and uses leading indicators such as safety climate surveys to “help commanders at all levels in their mishap prevention efforts.”