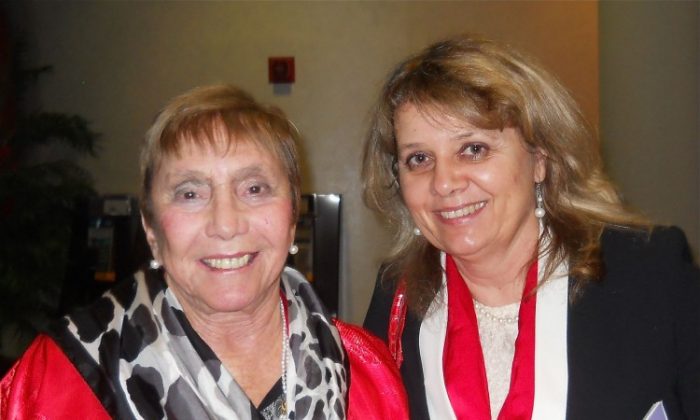 “It’s wonderful. The performance itself is spectacular, the dancers are fabulous, so it is really worth watching,” she said.

“The dancing was amazing,” added her personal assistant, Judith Laqua.

As an anthropologist, Ms. Kallen said she enjoyed the cultural and historical aspects of the performance, particularly how Shen Yun represented China’s diverse ethnicities.

“I liked that a lot,” she said, noting she was familiar with China’s diverse regions.

New York-based Shen Yun was born in 2006 out of a mission to revive China’s 5,000 years of divinely inspired culture. Shen Yun now has three companies touring the world performing classical Chinese dance, as well as ethnic and folk dances.

Ms. Kallen had made a study of many different cultures.

“I was a social and cultural anthropologist so I was visiting people all over the world and I did research in many, many places,” she said. “I got involved in human rights and that is the area I have been working in for 30 years.”

Ms. Kallen is the author of 13 books. She is currently working with the dean of the Faculty of Liberal Arts and Professional Studies at York University and others in the faculty’s Human Rights and Equity Studies program to create a new department at the university.

“We are trying to expand the human rights component, hopefully eventually getting a department of human rights,” she said.

The University of Ottawa has a human rights research centre within the Faculty of Law, where Ms. Kallen was a visiting chair for a year in 1990.

“I sort of have a dream that we could do something like that at York.”

She said she also enjoyed the Shen Yun Performing Arts Orchestra, unique for using a Western philharmonic orchestra as the base while traditional Chinese instruments lead the melodies.

“I thought it was marvellous. I really liked the combination of instruments,” Ms. Kallen said.