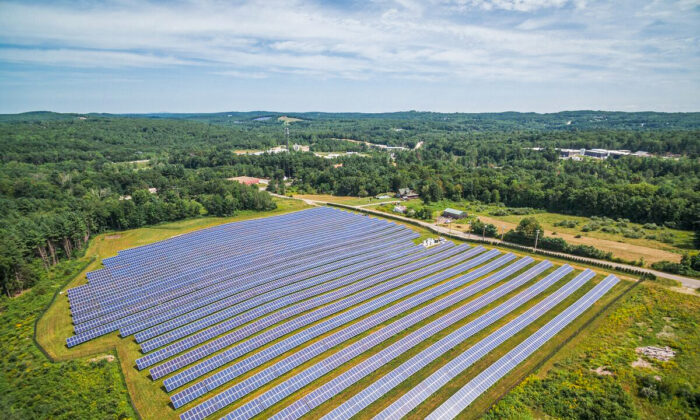 The sun’s rays are shining light on an industry that has long been in existence but has recently gained new momentum amid the national push for more renewable energy.

Solar accounted for 54 percent of all new electricity-generating capacity added during the first three quarters of 2021, per the Solar Market Insight Report.

For those looking to switch careers or take on a new job, options abound in the solar industry, with solar installers, welders, electricians, and construction workers among the groups that are currently the most in-demand, according to the PeopleReady analysis. The median pay rate sits at slightly less than $48,000 per year. In addition to these positions, the solar industry also employs scientific researchers, engineers, plant operators, real estate brokers, and sales representatives, among others.

To install solar power for a residence 10 years ago, the cost for a six kilowatt (kW) solar power system could have a price tag of more than $50,000, according to A1 Solar Store. Today, the cost for a six kW residential system has dropped to about $15,000. After six to eight years, the investment pays off and residents can expect to have solar energy for free.

For those who install a solar system, a 26 percent federal tax credit is available in 2022. If a system costs $10,000, homeowners can expect to owe $2,600 less when filing taxes. The credit is set to drop to 22 percent in 2023, and it will be eliminated in 2024. Loans for solar systems are also available from financial institutions and solar energy manufacturers, and some come with low rates and no down payment.

The Rise of Community Solar Power

While traditionally, homeowners have placed solar panels on their roofs to absorb the sun’s energy, the arrangement left out others who might be interested in solar power access, such as renters or those with fewer financial resources.

“Community solar programs meet that need with large-scale solar farms that share the benefits among hundreds of subscribers with no up-front costs or equipment to install while providing overall savings on electricity costs,” said Keith Hevenor, communication manager at Nexamp, a Boston-based solar developer specializing in community solar and energy storage solutions.

Nexamp, which develops, builds, owns, and operates its own solar sites, has more than 250 projects across the country that generate more than 400 megawatts of clean energy. Those who take out a subscription can tap into solar power without having to install their own rooftop panels and can save up to 15 percent on electricity costs, though the exact savings vary by location.

“The fastest-growing segment of the solar industry is community solar,” David Amster-Olszewski, founder and chief executive of SunShare, the nation’s oldest and largest residential community solar company, told The Epoch Times. “It is trending in all states and growing so popular that it often has waitlists for residential and commercial customers to access a garden, ranging from four months to three years.”

Historically, solar power has been limited to daylight hours, but “new energy storage technologies make it possible to maximize generation during the daytime and store excess energy for use overnight, as a backup in emergencies or at times when traditional electric rates are higher,” Hevenor told The Epoch Times.

“At our company, we have had explosive growth in our workforce hiring,” Waller said. “We started in 2020 with 750 employees and now have over 2,200. The jobs we have filled are comprised of management, sales, installers, and customer service.”

New technologies enable solar power to be generated in diverse locations, including places that get less sunlight, such as the Pacific Northwest.

“Because solar lends itself to a more distributed approach, these jobs can be more evenly spread out across many communities and demographics,” Hevenor said.

There are even opportunities for those with available land that could be used for solar generation.

“Often, landowners will lease a small portion of their land to a solar developer, generating a long-term source of reliable income that allows them to continue farming the rest of their land and preserving the family business,” Hevenor said.

Agrivoltaics, which refers to the simultaneous production of solar power and agricultural use, is becoming more common in some regions.

Vegetable farmers might grow crops under and around panels, for instance.

“Good solar developers are working with communities to increase pollinator growth and wildlife habitats on their projects,” Hevenor said.