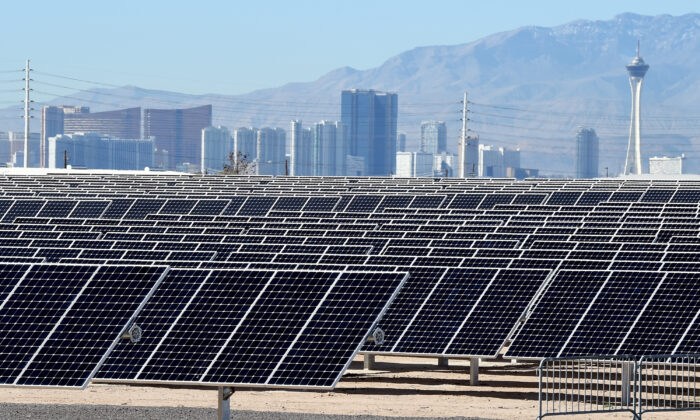 The Las Vegas Strip is shown behind solar panels during a dedication ceremony to commemorate the completion of the 102-acre, 15-megawatt Solar Array II Generating Station at Nellis Air Force Base in Las Vegas, Nevada, on Feb. 16, 2016. (Ethan Miller/Getty Images)
Environment

On Sept. 8, the Biden administration’s Department of Energy issued a new report, “The Solar Futures Study,” which claims solar energy could power 40 percent of the U.S. electricity grid by 2035 and 45 percent of the grid by 2050.

The report, produced by the DoE’s Solar Energy Technologies Office (SETO) and the National Renewable Energy Laboratory (NREL), proposes that this could be done without raising the cost of electricity, because of continued technological improvements and “demand flexibility.”

Expanding on what “demand flexibility” would mean, the report hints at the possibility of expanded real-time changes to electricity pricing, “enabled by Internet-of-things appliances and communications.”

Solar capacity would have to reach 760 to 1,000 gigawatts by 2035 to realize either of the report’s two decarbonization scenarios (the report also includes what it calls a “business as usual” scenario).

For context, the United States had installed roughly 80 gigawatts of solar capacity in 2020, according to the report.

By 2050, solar capacity would need to reach 1,600 gigawatts to achieve what the report calls a “fully decarbonized grid.” Its third and most ambitious scenario, a preliminary modeling of total energy system decarbonization, would require 3,000 gigawatts of solar power by 2050.

The report projects that its maximum deployment scenario could require up to 0.5 percent of the contiguous U.S. surface area—roughly 16,080 square miles, an area slightly smaller than the commonwealth of Massachusetts and the state of Connecticut combined.

While it notes that “land acquisition poses challenges,” the report asserts that contaminated land, bodies of water, farms, and grazing areas could all be used.

A SETO statement on the report stated that “aggressive cost reductions” would be essential to realizing either of the two decarbonization scenarios.

The report itself argues that “soft costs,” including permitting, customer acquisition, and installation labor, are major contributors to the high cost of solar energy, and that the hard costs of solar power have rapidly declined, with International Energy Agency reportedly claiming that some solar power systems can now offer the “cheapest … electricity in history” in its World Energy Outlook 2020.

Notably, the report assumes that the costs of both decarbonization scenarios would be offset by benefits to air quality and avoided climate change damages, which it calculates at more than $1 trillion for both scenarios.

The report doesn’t appear to calculate the pollution or other environmental damage associated with producing or using solar panels, which may contain lead, cadmium, arsenic, and other toxic heavy metals mined in countries with more lenient environmental standards than the United States. The new solar infrastructure could potentially occupy land used by other organisms or ecological processes.

Although the report does note that producing and disposing of solar power technologies could negatively affect “[low- and medium-income] and communities of color,” it asserts that such harms “are trivial relative to the existing energy system,” arguing they could be mitigated through the repair, reuse, and recycling of solar panels.

The NREL didn’t immediately respond to questions about the potential environmental costs of large-scale solar deployment.

The report was met with a range of reactions on Twitter.

“This is a terribly weak goal. Horrible,” wrote Margaret Klein Salamon, executive director of the Climate Emergency Fund and a self-described “climate warrior.”

“I think solar should be a large part of the energy mix. If it gets to 20 percent, I’d be really happy. Set achievable goals and you won’t have to deal with large-scale policy failure,” wrote Jeff Terry, a professor and energy researcher at the Illinois Institute of Technology.

Correction: The study calculated that the maximum deployment scenario would require roughly 16,080 square miles of space, not roughly 15,600 square miles. The Epoch Times regrets the error.