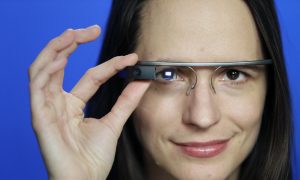 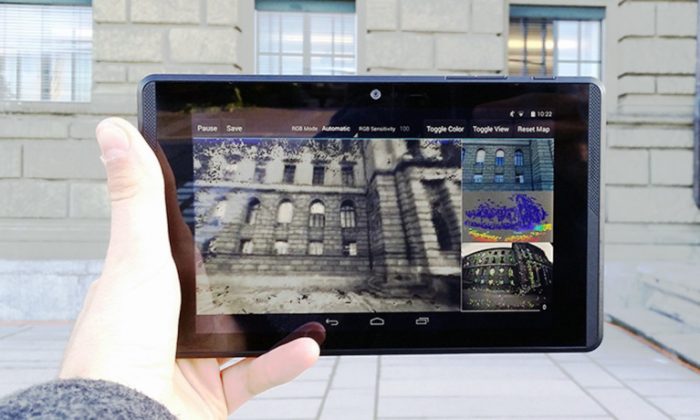 When Thomas Schöps wants to create a 3D model of a building, he pulls out his tablet computer. As he completes a leisurely walk around the structure, he keeps the device’s rear-facing camera pointing at the building’s façade.

Bit by bit, an impressive 3D model of the edifice appears on the screen. It takes Schöps, a doctoral student at ETH Zurich, just 10 minutes to digitize the structure.

Schöps is part of a team led by Marc Pollefeys, an informatics professor, who developed the software that makes the 3D maps possible. The team presented a paper describing the work at the International Conference on 3D Vision.

Development was carried out as part of Google’s Project Tango, in which the internet company is collaborating with 40 universities and companies.

The method works by purely optical means. It is based on comparing multiple images, which are taken on the tablet by a camera with a fisheye lens, and uses the principle of triangulation in a manner similar to that applied in geodetic surveying.

Or, to put it simply: The software analyzes two images of a building’s façade that were taken from different positions.

For each piece of image information, each pixel in an image, it searches for the corresponding element in the other. From these two points and from the camera’s known position and viewing angle, the software can determine how far each picture element is from the device and can use this information to generate a 3D model of the object.

Long gone are the days when the models were restricted to the outlines of buildings and basic features such as window openings and doorways. Instead, they now even show architectural details such as the arrangement of bricks in a stone façade.

It Works Outdoors in Sunlight

The new software offers some key advantages over existing methods. One advantage is that it can be used in sunlight.

“Other systems work using a measuring grid of infrared light,” explains Torsten Sattler, another postdoc in Pollefeys’ group who is participating in the project.

In the infrared method, the device projects a grid of infrared light onto an object; this grid is invisible to the human eye. An infrared camera captures the projected image of the grid and uses this to generate a three-dimensional map of the object.

“This technique works well indoors,” says Sattler. But he goes on to say that it is poorly suited to outdoor shots in sunlight. This is because sunlight also contains infrared components, which severely interfere with the measurements.

“Outdoors, our method has clear advantages. Conversely, infrared technology is better suited to indoor use in rooms whose structures are less pronounced, such as rooms with uniform, empty walls.”

The scientists programmed the software for the latest version of the Project Tango mobile device.

“These tablets are still in the development phase and are not yet intended for end users, but they have been available for purchase by interested software developers for a few months now, also in Switzerland. The first apps for them have already been developed; however, at the present moment the device is out of stock,” says Schöps.

Pollefeys’ working group already developed a 3D scanner for smartphones two years ago. This was intended for smaller objects. The current project allows even whole buildings to be mapped for the first time, thanks to the fisheye lens and the device’s high processing power.

“In future, this could probably even be used to survey entire districts,” says Sattler.

As the researchers have found, the mapping of large objects is plagued by calculation errors in respect of the 3D coordinates.

“It isn’t that easy to differentiate between correct and incorrect information,” explains Sattler. “We solved the problem by programming the software to scrupulously delete all dubious values.”

Real-time feedback is essential to ensuring that the 3D model does not become a patchwork. Thanks to a preview mode the user always knows for which building areas they have collected enough information and which still require scanning.

This real-time feedback is possible because—thanks to its high processing power—all of the calculations are performed directly on the tablet. This also paves the way for applications in augmented reality, says Sattler.

One example is a city tour in which a tourist carries a tablet as they move around a city in real life. If they view a building “through” their tablet, additional information about the building can be displayed instantly on the screen.

Other potential applications include the modeling of buildings, the 3D mapping of archaeological excavations, and virtual-reality computer games.

The technology also could be integrated into cars to allow them to automatically detect the edge of the road, for example, or the dimensions of a parking space. The team has utilized findings from the EU’s V-Charge project to develop self-parking cars, in which Marc Pollefeys’ group was also involved.

“Our software is now part of Google’s software database. Of course, we hope that Google will make our technology available to end users and include it as standard in the next version of the Tango tablet,” says Sattler. “Obviously, our dream is that some day every mobile device will include this function, allowing the development of apps that utilize it.”

A large computer manufacturer recently announced its intention to put a smartphone with the Google Tango technology platform on the market this coming summer.