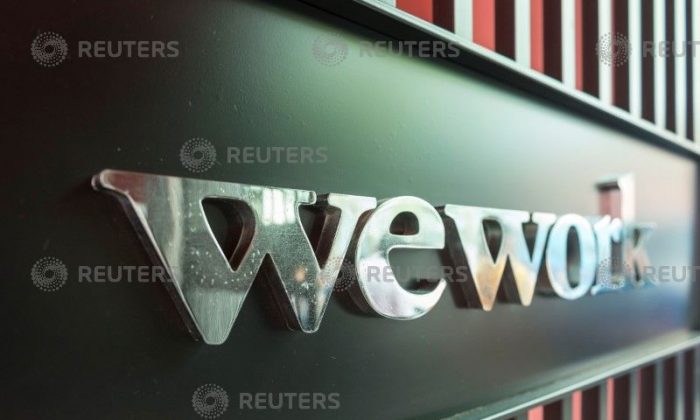 A logo of U.S. co-working firm WeWork is pictured during a signing ceremony in SHANGHAI, China Apr. 12, 2018. (Jackal Pan via Reuters)
Companies

SAN FRANCISCO/NEW YORK—Japan’s SoftBank Group Corp. is in discussions to buy a majority stake in U.S. shared office space provider WeWork Cos, a source said, potentially doubling down on one of its biggest bets on a loss-making startup.

A deal would signal a shift for SoftBank, which runs the world’s biggest private equity fund and has concentrated its ownership of late-stage startups in minority stakes, as it seeks attractive targets for its huge pool of capital.

SoftBank shares fell 5.4 percent and suffered their biggest one-day drop in nearly two years on Oct. 10 partly on concerns about the prospects of eight-year-old WeWork whose outlook is tied closely to the ups and downs of the real estate market. Recent technology sector weakness also weighed on SoftBank’s shares, traders said.

The source told Reuters that pricing and other details of the WeWork investment have yet to be firmed up, adding it was not a done deal. A second source also said SoftBank is in talks about a major new investment in WeWork.

WeWork and SoftBank declined to comment. The sources spoke on the condition of anonymity as the details of the talks were private.

SoftBank and its giant Vision Fund invested $4.4 billion in WeWork last year and the Japanese company holds two board seats.

With SoftBank having little trouble raising funds, its main concern is finding assets that it believes can earn an attractive enough return, said Chris Lane, a Hong Kong-based analyst at Sanford C. Bernstein.

“The beauty of WeWork as a business is because they’re trying to go global and they’re moving quite fast they can absorb that capital,” he said.

WeWork’s business is growing rapidly, with second-quarter sales more than doubling from a year earlier. In September it surpassed JPMorgan, the biggest U.S. bank, as the largest tenant of Manhattan office space, highlighting growing demand for flexible leases.

The startup’s prospects, though, have been treated with skepticism by some Silicon Valley investors who see the company as an overvalued real estate play vulnerable to a property market downturn. In its first-ever release of financial results in August, WeWork said its second-quarter losses mounted.

A majority stake in WeWork for SoftBank, which has raised more than $93 billion to create the technology-focused Vision Fund, would be a shift from its usual practice of taking minority stakes in high-profile late-stage startups.

SoftBank has invested billions of dollars in loss-making U.S. ride-services firm Uber Technologies but owns only a minority stake.

WeWork and the Japanese company are closely entwined, with hundreds of SoftBank staff using space at the two companies’ Japanese joint venture and SoftBank considering moving its headquarters into WeWork offices.

SoftBank CEO Masayoshi Son points to artificial intelligence as the common thread linking its portfolio companies, with that technology in the future able to drive vehicles, diagnose diseases, and power financial services.

WeWork’s Chinese unit raised $500 million in July from investors including SoftBank, Hony Capital, and Trustbridge Partners, to drive its expansion in that country.