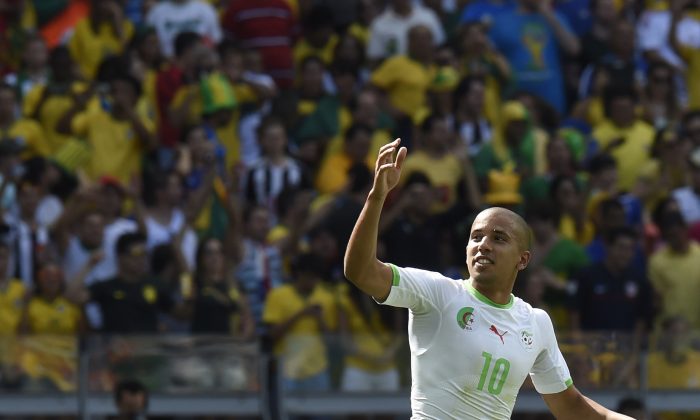 Algeria's forward Sofiane Feghouli celebrates after scoring his team's first goal during the Group H football match between Belgium and Algeria at the Mineirao Stadium in Belo Horizonte during the 2014 FIFA World Cup on June 17, 2014. (PHILIPPE DESMAZES/AFP/Getty Images)
Soccer

Algeria and Valencia midfielder Sofiane Feghouli has played well in the World Cup so far, but he is not being linked with any clubs yet.

The 24-year-old scored a penalty against Belgium in Algeria’s opening World Cup 2014 match, and has played pretty well in general.

Feghouli has created the most chances among his Algerian team mates (3), and notched 8 assists with Valencia in the 2013/2014 season.

According to TalkSport, Feghouli was a Liverpool transfer target in 2013, and a Manchester United target in 2012.

Algeria are currently occupy the second spot in Group H, and are set to qualify if they draw or beat Russia on Thursday. The African team will certainly count on Feghouli to deliver the goods, and power them through.

Should Algeria make history and qualify for second stage of the World Cup, and if Feghouli continues to play well, clubs will certainly come looking for his signature soon.

CURITIBA, Brazil—Now that Algeria has won its first match at the World Cup since 1982, coach Vahid Halilhodzic called on his team to help the country turn the page on one of the most controversial episodes in the tournament’s history.

Recalling the way West Germany and Austria played out a group game to deny Algeria a second-round berth at the 1982 World Cup, Halilhodzic said there “are moments that can become history” — and that Thursday’s Group H encounter against Russia was one such moment.

After its convincing 4-2 victory over South Korea, Algeria is in second place in the group and knows that victory over Russia would put it into the second round for the first time. A draw would be enough if group leader, and already qualified, Belgium beats or draws with South Korea.

Halilhodzic said the match against Russia was “the most important match” in Algeria’s history.

“When I see the great champions being eliminated already and the Algeria team who is now looking forward to the second round, it’s a historical match,” Halilhodzic said.

Algeria came closest to qualifying for the second stage of the World Cup in 1982 when West Germany and Austria played out a result that suited them both. The two teams, meeting a day after Algeria had won its last group game, knew that a 1-0 win for West Germany would put both through to the second round at Algeria’s expense.

“Unfortunately rigging kept us from going further,” he said. “That was the first Algeria team to succeed so impressively and we will see continuation tomorrow evening.”

Halilhodzic also it was “normal” to think he would put out the same team after it beat South Korea following five changes to the team, three of whom scored.

However, the combative coach who once again took an opportunity to rail against the Algerian media for a supposed lack of support said he had some worries mostly to do with the physical shape of some unnamed individuals.

Halilhodzic said it would be “unforgettable” if Algeria wins Thursday.

“Afterwards I can sing, I can dance … I think even you Algerian journalists will appreciate that,” he said.

Halilhodzic sought to downplay his team’s status as favorite, and noted that Russia was “well-prepared physically and tactically” and that in Fabio Capello had one of the best coaches in the world.

He said Russia was unlucky not to get something out of the game with Belgium. Russia, which dominated large passages of play, lost 1-0 to a late goal.

Halilhodzic said the pitch at Arena da Baixada in the southern Brazilian city of Curitiba was “not in great condition” and that he had asked the grounds men to water it. Like Spain and Australia in the previous match, Algeria and Russia have been denied the opportunity of training at the group because it’s been cut up badly.