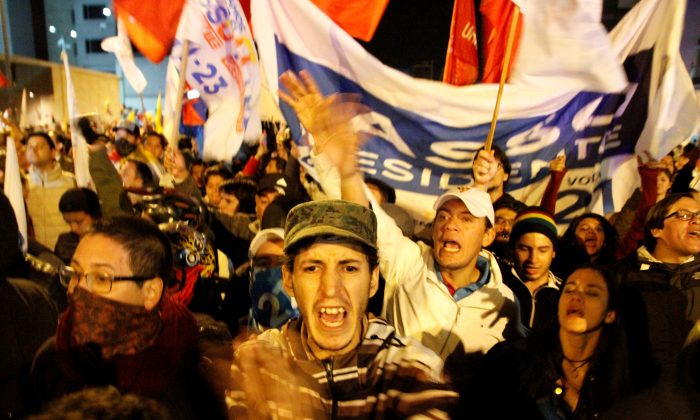 QUITO—Socialist candidate Lenin Moreno on Monday celebrated victory in Ecuador‘s presidential election, bucking a shift to the right in South America, but his conservative challenger demanded a recount as supporters took to the streets in protest.

It was a boost for the struggling leftist movement in South America after right-leaning governments recently came to power in Argentina, Brazil, and Peru as a commodities boom ended, economies flagged and corruption scandals grew.

“Congratulations Ecuador, the citizen’s revolution has triumphed!” said Maduro, as did much of his cabinet.

Lasso had promised to denounce the embattled Maduro, who foes say has turned his country into a dictatorship.

Moreno, a paraplegic former vice president, secured 51.15 percent of the votes, compared with Lasso’s 48.85 percent, with nearly 99 percent of votes counted, according to the electoral council on Monday morning.

Lasso, who had proclaimed himself victorious based on a top pollster’s exit poll, disputed the close results that would extend a decade-long leftist rule in oil-rich Ecuador.

“They’ve crossed a line,” he told supporters in a hotel in his coastal hometown of Guayaquil on Sunday, vowing to challenge the results, a complex process that could take time.

“We’re going to defend the will of the Ecuadorean people in the face of this fraud attempt,” he said.

Lasso tweeted photos showing what he said were original votes for him that were changed by electoral officials. The election authority denied fraud allegations.

Lasso contrasted Sunday’s quickly tallied vote with the first round in February, when the results took days to come out.

Hundreds of his supporters swarmed in front of electoral council offices in the capital, Quito, and Guayaquil, waving yellow, blue and red Ecuadorean flags and chanting “No to fraud!” and “We don’t want to be Venezuela!”

There were reports of isolated clashes on Sunday night, but protests ebbed as the night went on.

“This is shameless fraud, we all know it,” said taxi driver Roberto Vera, 50, on Monday. “They’re from the Venezuelan school, that’s their governance model and it will do great harm to all Ecuadorians.”

But ruling Country Alliance officials scoffed that Lasso was a sore loser and inciting violence.

Going forward, Moreno’s party has control of Congress, but he will need to cultivate support from many in the polarized country who view his narrow win with suspicion.

Moreno, who lost the use of his legs two decades ago when he was shot during a robbery, would become a rare head of state to use a wheelchair when he takes office on May 24.

“Lenin,” as he is commonly referred to by his supporters, celebrated in mountainous Quito overnight with the flag-waving crowd chanting, “Lenin President!”

“We’re going to keep building the path. We’ve done a lot but there’s a lot more to do!” he said, flanked by running mate and current vice president, Jorge Glas, as well as beaming outgoing President Rafael Correa. He broke into several songs, including one about Ernesto “Che” Guevara.

Moreno, a former U.N. special envoy on disability and accessibility, has a more conciliatory style than the fiery Correa and has promised benefits for single mothers, the elderly, and disabled Ecuadorians.

He will be under pressure to create jobs and crack down on graft amid corruption scandals at state-run oil company PetroEcuador and Brazilian conglomerate Odebrecht.

Lasso has criticized Moreno as being ill-equipped to deal with economic issues and warned that his major social promises would hit already pressured coffers in a country dependent on exports of oil, bananas, and shrimp.

“Moreno’s margin of victory was much smaller than those of his predecessor Rafael Correa, leaving him in a much weaker spot,” said John Polga, a political scientist at the U.S. Naval Academy.

“He has the advantage of a legislative majority (for now), but his government will have to confront fiscal restraints, a stagnant economy, and the burden of a recovery from last April’s earthquake.”