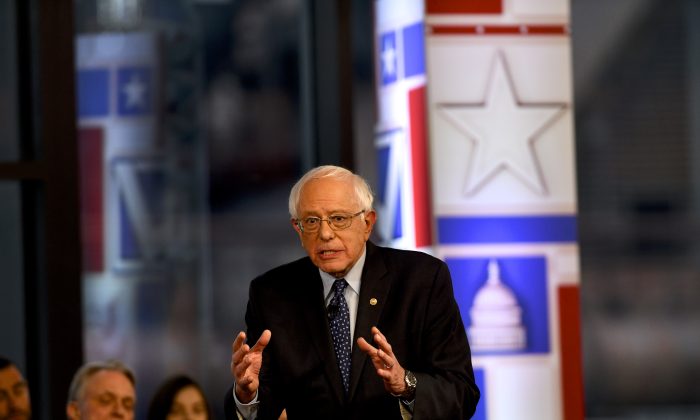 Presidential contender Sen. Bernie Sanders (I-Vt.) released 10 years of his tax returns on April 15, confirming that the self-described socialist, who often rallies against income inequality, is part of the nation’s top 1 percent.

To qualify to be in the top 1 percent bracket, individuals must have an adjusted gross income of at least $480,930.

Sanders’s 2020 campaign website meanwhile claimed, “We will no longer accept 46 percent of all new income going to the top 1 percent, while millions of Americans are forced to work 2 or 3 jobs just to survive and over half of our people live paycheck to paycheck.”

The senator attempted to defend his wealth at a Fox News town hall in Bethlehem, Pennsylvania, on April 15.

“This year, we had $560,000 in income,” Sanders said. “In my and my wife’s case, I wrote a pretty good book. It was a bestseller, sold all over the world, and we made money. If anyone thinks I should apologize for writing a best-selling book, I’m sorry, I’m not going to do it.”

In one exchange during the debate, Fox News anchors Bret Baier and Martha MacCallum pressed Sanders on whether he would voluntarily pay the 52 percent “wealth tax” that Sanders himself advocated for in 2016.

“Martha, you make more money than I do. Why don’t you do that?” Sanders replied to MacCallum.

“And she’s not running for president,” Baier added.

In another exchange, Baier asked Sanders if his success was due to the capitalist system he often criticizes.

“When you wrote the book and made the money, isn’t that the definition of capitalism and the American dream?” Baier asked, referring to Sanders’s memoir.

“No,” Sanders replied after a pause. “What we want is a country in which everyone has an opportunity. … A lot of people don’t have a college degree. A lot of people are not United States senators.”

Sanders, who is now making his second run for president, is leading other 2020 contenders in fundraising. In the first three months of the year, he raised $18.2 million for his White House bid.

Sanders is currently in second place out of all 2020 Democrat candidates, and trails behind former Vice President Joe Biden, according to an average of polling data aggregated by Real Clear Politics.

During the town hall, Sanders also admitted that his proposed Medicare for All health care overhaul would mean many Americans would “pay more in taxes.” An independent assessment of the costs of Medicare for All by the left-leaning Urban Institute estimated that the proposal would cost $32 trillion over 10 years.