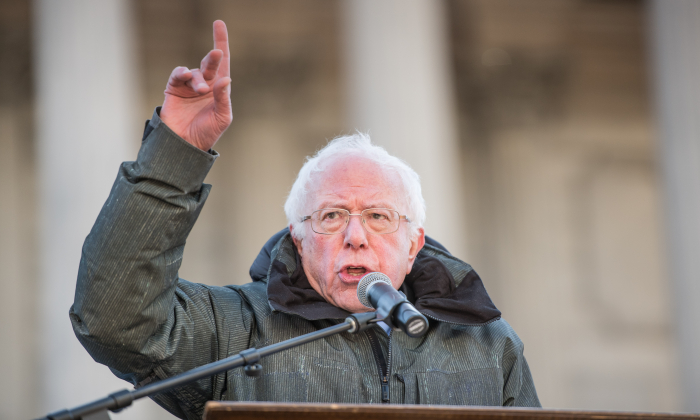 Sanders (I-Vt.) announced his candidacy in an email to supporters and a video posted on Twitter. The video features the socialist policies which have helped steer the Democratic party to the hard left, including Medicare for All, the Green New Deal, free public university tuition, and the $15 minimum wage.

“Our campaign is about creating a government and economy that works for the many, not just the few,” Sanders said in an email to supporters.

In 2016, Sanders lost the Democratic presidential primary election to Hillary Clinton. Sanders’ push against Clinton, a former first lady, U.S. senator and secretary of state, was notable because few Democrats seemed inclined to challenge her claim on the nomination.

While he has remained mum about Clinton and the DNC, Sanders has relentlessly criticized President Donald Trump. In response to Sanders’s 2020 bid announcement, Trump’s campaign issued a statement pointing out that Sanders is a socialist.

“Bernie Sanders has already won the debate in the Democrat primary because every candidate is embracing his brand of socialism,” Kayleigh McEnany, the Trump campaign spokeswoman, said. “But the American people will reject an agenda of sky-high tax rates, government-run health care and coddling dictators like those in Venezuela. Only President Trump will keep America free, prosperous and safe.”

While the contestants share much of Sanders’s platform, most are either women or ethnic minorities, characteristics bearing an advantage from the perspective of the intersectional politics of the Democratic party. Sanders showed that he was aware of the disadvantage and tackled it in an interview with Vermont Public Radio.

“We have got to look at candidates, you know, not by the color of their skin, not by their sexual orientation or their gender and not by their age,” Sanders said. “I think we have got to try to move us toward a non-discriminatory society which looks at people based on their abilities, based on what they stand for.”

The primaries and caucuses that determine the party’s nominee will begin in February 2020 in Iowa, and the Democratic winner is likely to face Trump in the general election in November.

Sanders announced his bid the day after Trump delivered a speech on socialism to the Venezuelan community in Florida. The president vowed to support Venezuela’s interim President Juan Guaidó and slammed socialist dictator Nicolas Maduro as a puppet of the Cuban communist regime. Trump said the “days of socialism and communism are numbered” in South America and the world.

In an interview with CBS, Sanders said he was expecting Trump to suggest that socialist policies would collapse the U.S. economy much like what happened to Venezuela. The president has often used Venezuela as an example of socialism’s failure. Once an oil-rich nation, Venezuela has been crippled by socialist policies instituted by Maduro and his predecessor.

“Socialism has so completely ravaged this great country that even the world’s largest reserves of oil are no longer enough to keep the lights on. This will never happen to us,” Trump said as the crowd in Miami.

A former mayor of Burlington, Vermont, Sanders won a House of Representatives seat in 1990, making him the first independent elected to the House in 40 years. In 2006, he won a Senate seat and in 2018 was voted in for a third six-year term.

“Personally, I think he missed his time,” Trump said on Feb. 19. “I wish Bernie well, it will be interesting to see how he does. He was not treated with respect by Clinton.”