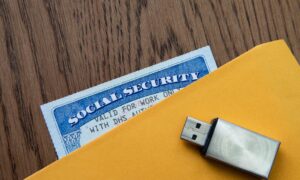 People line up outside of the Social Security Administration office in San Francisco, Calif., on Feb. 2, 2005. (Justin Sullivan/Getty Images)
Advice

Social Security Disability: The Program Everyone Loves to Hate

I was heading into a local grocery store the other day, and I noticed a few people gathered around a car parked in one of the spots reserved for people with disabilities. I heard someone yelling. As I got closer to the car, I saw an old guy ranting and raving at the driver of the car, a woman maybe in her mid-40s. There was a younger man in the passenger seat. I can’t repeat the “colorful” language the guy was using. But here is a snippet of what I heard: “Why the @#$ percent are you parking in a handicapped spot? You don’t have a sticker, and there’s obviously nothing wrong with you!”

The woman got out of her car. And with a totally unexpected air of quiet dignity, she calmly told this man: “My son has end-stage non-Hodgkin’s lymphoma. He has about three months to live. I would think that for the last 90 days of his life, he ought to be able to park a little closer to the front door of this grocery store.”

The jerk slumped away muttering something unintelligible. The small crowd of people were booing him and actually started clapping for the driver of the car. It really was a touching moment.

I just wish I could show some of this same quiet dignity when I respond to the frequent email rants I get from so many people about the Social Security disability program. I’m always puzzled why so many people simply assume that most folks getting disability benefits, just like people parking in handicapped spots, are pulling a fast one over on the rest of us.

Getting a handicapped sticker for your car is one thing. Getting Social Security disability benefits is an entirely different matter. Please, dear readers, believe me: As someone who worked with the disability program for many years, I know you have to be severely disabled to qualify for benefits. Of course, I’m not naive enough to think that out of the millions of Social Security disability beneficiaries, there aren’t a few bad apples in that big barrel who are getting benefits they don’t deserve. But I assure you their numbers are few and far between.

The Social Security disability program is universally recognized as one of the most difficult programs to qualify for. You simply don’t get benefits if you have a bad back or a bum knee. You must have a severe physical or mental impairment that is expected to keep you out of work for at least 12 months—or a condition that is terminal.

Some people have written to complain about drug addicts and alcoholics getting benefits. Let me clear up that myth. You DO NOT get Social Security disability benefits simply because you are an addict or alcoholic. But you might get benefits if you have problems associated with those addictions. For example, you could qualify for disability if you have severe liver disease, a condition that might have been brought on by excessive drinking. But that’s no different than someone getting benefits who has lung cancer brought on by heavy smoking.

Having explained how truly difficult it is to qualify for Social Security disability benefits, I can tell you from experience that everyone seems to know someone (a brother-in-law, a neighbor, that guy in the handicapped parking space) who they believe is getting such benefits fraudulently.

For example, someone recently complained to me that she knows a woman who is getting disability benefits who takes kickboxing lessons. Someone else saw a neighbor who is on disability cleaning his gutters. Another reader told me about a guy “with a fake disability” who was painting a house. Somehow, those little snippets of daily life proved to them that these folks were cheating the system.

Well, just because a woman is taking kickboxing lessons and a guy is cleaning his gutters and another guy is doing some painting does not prove they are healthy and don’t deserve disability benefits. Maybe one has cancer and another has some severe mental issues and the other has kidney disease. I don’t know. And these accusers don’t know either. You simply cannot make broad assumptions about their eligibility for disability benefits without knowing all the facts.

Someone else told me about a guy who was getting disability benefits who “gambles all his money away every month at a local casino.” She went on to say, “This proves the system is corrupt.”

Well, no, it does not prove that. It might prove the guy is a bad money manager. But that’s got nothing to do with the fact that he has a disability that qualifies him for monthly benefits. If there was a little old lady who gambled away half of her Social Security retirement check every month, would you say that “proves the system is corrupt”? No. It just proves there is a woman probably not making the smartest decisions about how to spend her Social Security retirement money. And so, too, there are people who don’t spend their Social Security disability money very wisely.

Having said all that, I can tell you this. I’ve been working with the Social Security program long enough (almost 50 years) to know that no matter how much preaching I do, some of you will just not believe me. You are absolutely convinced that people are cheating the system. Well, if that’s so, then let me put the burden on you. If you claim to know someone you think is getting Social Security disability benefits he or she is not due, I challenge you to do something. Turn that person in. Call the Social Security fraud hotline at 800-269-0271. Or go online at SocialSecurity.gov, and click on “Report Fraud” under the “Contact Us” link. Your report can be anonymous.

However, I also can tell you from experience that 99 percent of you who claim to know people who are supposedly cheating the system will not do this. That tells me two things. First, people will believe what they want to believe. They think that government is corrupt and inefficient, so they want to believe there are a bunch of deadbeats who snookered the clueless bureaucrats and are ripping off the Social Security system. But the second thing the lack of fraud reporting tells me is that, deep down, these folks know it’s not true. They just like to gripe. And some of them like to hassle nice mothers with disabled sons who are parking closer to the front door of the grocery store than they can.