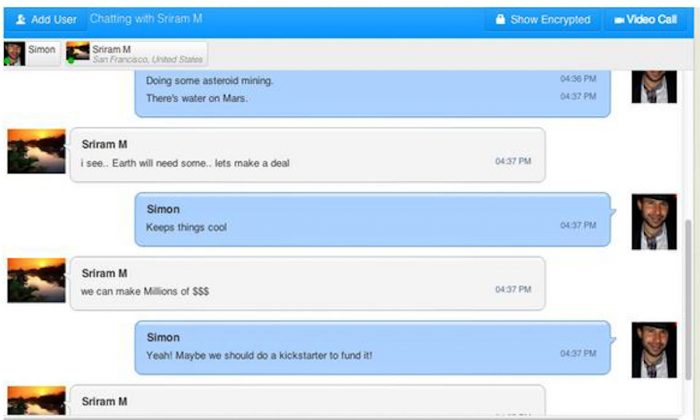 It’s Unsene. The first social messaging platform suitable for popular use that features military-grade security to protect privacy will welcome users next month.

“There’s no back door. You keep the keys; we don’t,” reads Unsene’s product page on the crowd funding website Indigogo.

“With regular email accounts, the message is like a postcard,” explained Unsene CEO Chris Kitze in an email. “It’s sent out in the open, and anyone with access to the various network switches and email servers your message passes through [can read it].” Sometimes there are 20 to 30 points at which the message can be intercepted, Kitze said.

Unsene offers messaging, video calls, unlimited file sharing, and more. All information is purged every seven days, and the information always goes directly from one user’s computer to the other’s encrypted, without an intermediary and without the information being stored in Unsene systems. A “self-destruct” option that will be available in the future will allow the user to set a time for the message to be erased before the seven days are up. Premium users will be able to hold their messages for longer than seven days if they wish.

Privacy advocates have raised concerns about Skype allegedly sharing data with third parties since Microsoft the took the reigns in 2011. The Guardian reported that documents leaked by the National Security Agency’s Edward Snowden show Skype gave user data to the agency through the NSA’s Prism program.

The article states: “In July last year [2012], nine months after Microsoft bought Skype, the NSA boasted that a new capability had tripled the amount of Skype video calls being collected through Prism.”

Unsene prides itself on not being part of the Prism program, but Kitze warns it is hard to guarantee an NSA-proof platform.

“The military and NSA have computer technology that’s probably 30 years ahead of what you and I have, so when they say ‘it’ll take 30 years before someone can break into that,’ it means they can probably break into it today,” he said. “We can’t make a claim that something is unbreakable, but this is much, much stronger than what’s available with AES [Advanced Encryption Standard].”

Unsene has built its business model around privacy. Its crowd sourced funding through Indigogo and the personal funds the developers have put into the project are meant to maintain its independence—its function as a public service.

“Because of our track record and past success, we could have raised money from venture capital,” reads the Unsene Indigogo page. “But if we did, then we might lose the autonomy that is critical for a project like this, so we won’t go down that road.

“We believe that the future of free speech and the internet in general and all over the world, depends on the ability for everyone to have free and open communications. Without that, people don’t have an opportunity to learn what is true.”

The privacy features of Unsene are too stringent for it to be exported to Cuba, Iran, Sudan, or North Korea.

Unsene expects to ship mid-August, reported Kitze, with a cost to consumers of $47 per year. He said Unsene is also working on a Chinese landing page for the Indiegogo campaign. Private messaging is of particular importance in China, where Skype security concerns have been high.

In January, dozens of organizations, including the Electronic Frontier Foundation, Reporters Without Borders, Global Voices Advocacy, and GreatFire.org, urged Microsoft to publish details about Skype’s relationship with TOM Online, a Chinese Internet company that hosts a Chinese regime-approved version of Skype.

The organizations published a joint letter urging Skype to greater protections for user privacy all over the world. Part of that letter reads: “Many of its users rely on Skype for secure communications—whether they are activists operating in countries governed by authoritarian regimes, journalists communicating with sensitive sources, or users who wish to talk privately in confidence with business associates, family, or friends.”

Previous high-security messaging systems were either too expensive for popular use, or more like “tech toys, not made for regular people,” according to the Unsene webpage.