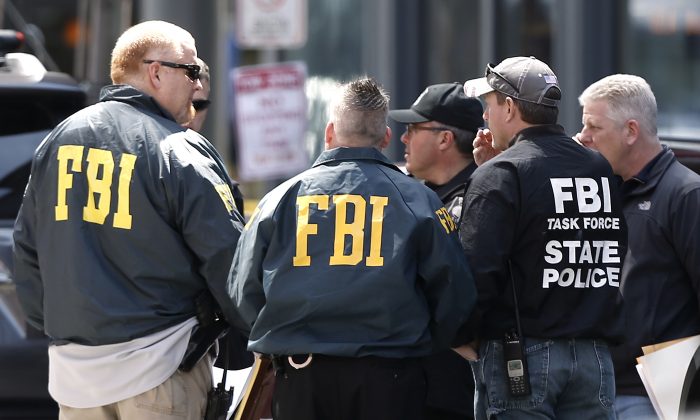 FBI agents gather near the finish line of the Boston Marathon in Boston, on April 16, 2013. Citizens in Boston, and online from around the world, are helping the investigation. (AP Photo/Winslow Townson)
Boston Marathon

Citizen investigators do what they can
By Tara MacIsaac

Boston Marathon Explosions investigated through Social Media: Users on Reddit and other social media sites are searching through photos and collaboratively trying to find the culprit in the explosions at the Boston Marathon.

Forensic evidence collected by investigators shows a black nylon back pack may have carried the explosives. The FBI asked people who were at the marathon to report if they remember seeing someone with a dark-colored backpack, probably weighed down with a pressure cooking device.

Users on social media website Reddit.com were scouring photographs of the crowd and trying to pick out suspects based on the FBI report Wednesday.

At a media conference in New York City on Wednesday titled “paidContent” hosted by GigaOM, Reddit’s general manager, Erik Martin, said it would be really good if Reddit users found the culprit, but even if they don’t, it could help them cope with the tragedy.

“If it helps them just kind of deal with this and just feel they’re doing something active, then that’s still pretty good,” Martin said.

Panel moderator, Jacob Weisberg, Chairman and Editor-in-Chief of Slate Group, commented: “There’s a picture of a guy, and people are pointing to him as a suspect. … If he is [the culprit], Reddit’s going to be a hero, and if he’s not, it’s going to be the Richard Jewell case again.”

Richard Jewell was wrongly suspected in the bombing at 1996 Olympic Park in Atlanta, Ga. Eric Robert Rudolph was later convicted.

Reddit is not the only social media site buzzing with citizen investigations. Image sharing website 4chan.org also has photos from the marathon in which people carrying back packs that fit the description are circled. Two separate images show a man carrying a back pack, and the same man without the back pack later. A user commented, “Back pack seems to be missing.”

Richard DesLauriers, the FBI agent in charge in Boston, said at a news conference on Tuesday that information from the community will be very important in the investigation. At the time of the conference more than 2,000 tips had been received.

“Someone knows who did this,” he said. “Importantly, the person who did this is someone’s friend, neighbor, co-worker or relative.”

The FBI states: “If you have any information or visual images related to the explosions, please contact the FBI by e-mailing boston@ic.fbi.gov or calling 1-800-CALL-FBI (prompt #3). No piece of information or detail is too small.”