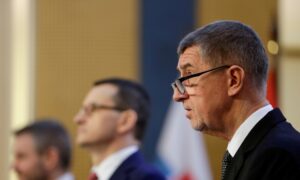 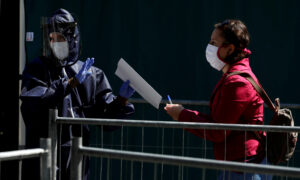 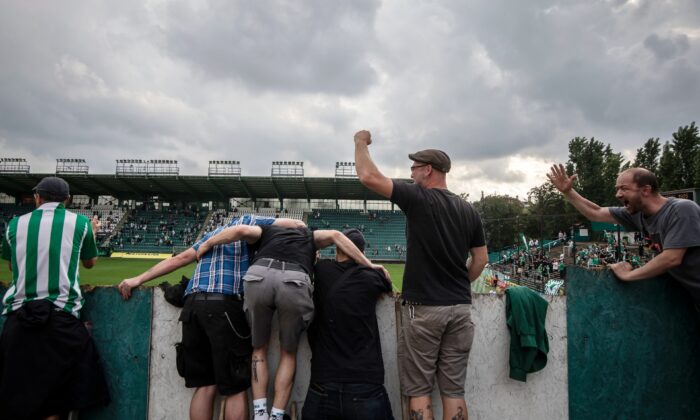 Football fans cheer and stand on ladders as they watch a Czech First League match between Bohemians 1905 and FK Jablonec at Dolicek Stadium in Prague, Czech Republic, on June 14, 2020. (Gabriel Kuchta/Getty Images)
Europe

PRAGUE—So far 65 people including active athletes have contracted COVID-19 as infections spread after a party at a Prague music club, the Czech capital’s hygiene service said on Wednesday.

The Czech Republic has recorded 14,324 cases of the new coronavirus and 360 deaths—a fraction of the worst-hit European nations—but it has seen a resurgence of new cases in the past weeks.

The public health service did not name the sports clubs affected. Major Prague soccer clubs Sparta Prague, Bohemians 1905 and Dukla Prague said they had infections in their reserve or junior teams, and floorball club Black Angels were also hit.

Black Angles A-team manager Tomas Janecek told Reuters some players attended the party identified by the health service and were informed by a friend a week later that they were infected.

So far six people from the club have tested positive and others including Janecek awaited testing in quarantine.

Further cases were found among other people who attended the event, she said.

The hygiene service and the music club, in downtown Prague, did not immediately respond to a Reuters request for comment.

Director Darek Jakubowicz of Bohemians told Reuters the B-team had two infections—both traced to the July 11 event—and were in pre-emptive quarantine.

“Other players had met (the infected) in training but no one else was infected,” he said.

Sparta, Bohemians, and Dukla all said their affected teams were in quarantine.

A spokesman for Sparta said the team had “single digits” of infections but could not confirm the club event as the source.

Dukla director Pavel Vandas said on Twitter that Dukla’s under-19 and under-18 teams were in quarantine after one under-19 player tested positive. Dukla did not give details on the source of the infection.