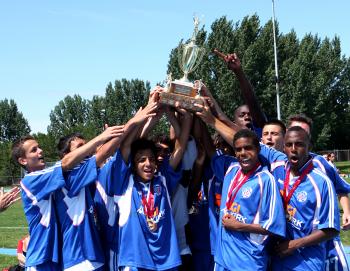 OTTAWA—The XXth Ontario Summer Games (OSG) wrapped up in Ottawa last Saturday. The OSG is the province’s premiere multi-sport event featuring 26 sports for over 3,000 athletes between the ages of 11 and 22.

While the world’s eyes are currently focused on the Olympics in Beijing, sports fans in Ottawa got a chance to see some of Canada’s future Olympians up close at over 40 different venues around the city of Ottawa.

Two of the many team sports featured at the OSG are soccer and field hockey. Soccer has the highest youth participation rate of all sports in Canada. Field hockey is often thought of in Canada as a women’s sport but the Canadian national women’s team failed to qualify for the Beijing Olympics while the men’s national team did qualify. Much like in soccer, field hockey European Cup matches are played in front of sell-out crowds

The boys’ soccer competition featured 138 athletes and a total of eight teams in which all players must be under the age of 15 as of Jan. 1, 2008. The medal rounds were played at the Terry Fox Athletic Facility near Mooney’s Bay beach.

In the gold medal game, the Mississauga Falcons downed the Kitchener Spirit 2–0. Adrian Dacon-Tash and Filip Iuliani scored the goals for Mississauga.

Just after the gold medal and trophy presentation, Iuliani briefly spoke about what could be the next step for him. “I probably want to go try the junior national team.” The OSG provides a great experience and stepping-stone for representing Canada in international competition. Iuliani looks forward to someday playing for his country.

“I think we’re getting better…soon we’ll be able to compete at a higher level.”

Mississauga Falcons coach Kerry Baroutoglou was ecstatic about his team’s performance and the OSG experience.

“The summer Olympics [Ontario Summer Games] happen once when you’re 15, so it’s something they’ll remember for the rest of their lives. The team learned a lot, they ‘gelled’, the chemistry came together at the right time.

“The fields were amazing and the refereeing was great.”

Baroutoglou also spoke about the next steps in the progression of a youth soccer player.

“I personally believe [the kids] should look at scholarships in the States. If they get a chance to go pro, that would be great.

“There’s also the Ontario provincial program, then the national program. It depends on how much they want it.”


At the Minto Field near the Nepean Sportsplex, in girls U16 competition, the Central West region (Kitchener/Waterloo/Guelph) defeated the South region (Mississauga/Oakville/Burlington) 4–1 to win the gold medal. The Central West team was dominant from the start and created several scoring chances on a very warm day in Ottawa.

Field hockey is played on a watered-down astro-turf surface.

Dianne Dowling, Sport Manager for field hockey at the OSG and junior women’s co-ordinator for the Outaouais Field Hockey Club talked about the potential future and development for the top girls who played at the OSG.

“The Canada Summer Games is the next step, being national squad players, and playing in the Olympics.

“Lots of players play both [indoor and outdoor field hockey]. [Indoor] helps develop high level of stick skills and in outdoor, you concentrate on space and long-ball hitting.”

“There is also the World Cup for men and women and the Pan-Am Games which is a huge thing for Canadian field hockey.”

The OSG was a huge success in Ottawa, with over 1,000 volunteers ensuring everything ran smoothly. The economic impact is expected to be $1.4 million, which was helped by plenty of sunshine for the three days of competition in the midst of a generally rainy summer.