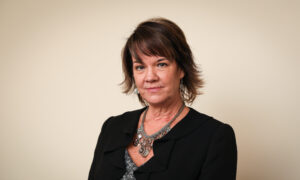 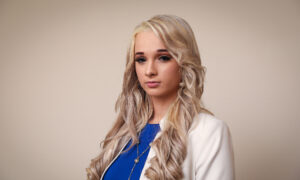 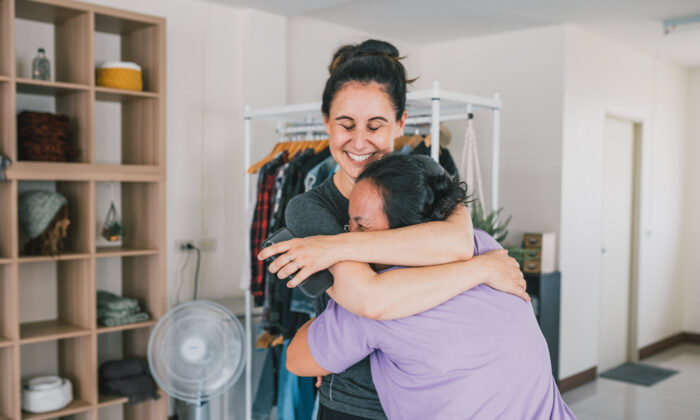 Pattaya, a city on the east coast of Thailand, is known for more than its gorgeous beaches, tropical weather, and thriving night-life. It’s also known as “the world’s sex capital,” and it’s sadly infamous for child sex trafficking.

Dianna Bautista sold everything she owned and moved from Southern California to Pattaya in 2014 to help girls and women who have been exploited. She had an idea of what to expect, but didn’t understand the scope of it until she was standing there.

“I had been to many red light districts before,” Bautista told The Epoch Times. She had done shorter trips to other regions to help exploited sex workers before moving to Pattaya to dedicate her life to it.

“So stepping into Pattaya was not a shock. But I was taken back by the vastness of it,” Bautista told The Epoch Times. “It feels like you can’t go any place in Pattaya without seeing a brothel.”

The red light district spans miles down the coast, she said, and inland through some parts of the city.

Bautista directs the non-profit Shear Love, a beauty school for trafficking survivors. It gives them a vocation, while providing all kinds of counseling to help them start a new life.

Shear Love is a partner program of Free Rain International (FRI), a global, faith-based organization that provides vocational education to survivors of trafficking. FRI also offers specialized training for people who want to be involved in the fight against trafficking.

“The majority of female students in our beauty and sewing programs have come from sexual exploitation,” Bautista said. “Many of them have been forced to prostitute themselves.”

Bautista spoke of a young girl, a minor, Shear Love is currently working to repatriate. “Knowing that hundreds of men abused this poor girl has been unsettling for us all,” she said. “But there was no way that our team could sit back while that was happening on our watch.”

“What has kept us going is knowing that she is no longer being sexually assaulted by predators, she is being completely protected from those who sought to hurt her, and she’s in full-time therapy being treated for her psychological scars,” Bautista said. “Her road to recovery will be very long, but the important part is that it has started and she never has to go back to the life she once knew.”

Bautista has watched young girls work through great emotional trauma. It’s made her reflect on how lucky she was to have a happy childhood.

How Childhood Should Be

She grew up in Corona, in Riverside County, and like many children so close to Anaheim, her happy early memories include trips to Disneyland.

Her mother and aunt would dress her and her friends in identical T-shirts “so they wouldn’t lose us. We always looked like we’re all on a school field trip, but it was a blast!”

She was five when she discovered her passion for hairstyling.

“I used to style all my dolls’ hair using my mom’s Paul Mitchell hair products,” she recalled. “Then I cut my best friend’s hair in junior high with my mom’s orange-handled kitchen scissors. I got in a lot of trouble.”

By the time she got to her high school prom, she was the one all her friends knew to go to for hairstyling.

She realized how lucrative “updos” for proms and weddings could be, so she began her career as a hairstylist. For 11 years, Bautista styled hair for magazines and red carpets.

But a mission trip to Kenya in 2010 was the catalyst for a different path. It caused her “to want to serve in the world,” she said.

When Bautista was walking through a Kenya slum with friends, she noticed a shack with a sign in front that read “salon.”

After speaking with a social worker, she learned that anyone who wanted to own or run a business simply placed the name of the business in front of his or her home. The simplicity of this system got her to thinking.

“I really wanted to do something to help these women who lived in the slums and were really good at hair, but didn’t have any education,” Bautista said. “Shortly after I came back from that trip, I met someone who was about to leave for Brazil to teach women how to cut hair. I said, ‘I’m coming, just so you know!’ And I went!”

In blog post on Sept. 1, 2011, she chronicled the wave of emotions she experienced during those turbulent first hours in Brazil: “From 4:30 [a.m.] to 10:02 [a.m.], I went from excitement to irritated to bored to sad to complete confusion.”

Some miscommunication had left her waiting for hours at the airport for a pastor who was supposed to pick her up, but didn’t show. While she was waiting, she read a letter friends had given her.

“There was no coincidence that the letter VJ and Ashley wrote me was supposed to be read when I was alone in an airport alone in a country where I am the foreigner,” she wrote in the blog. “If you get a chance, read Psalm 91.”

Psalm 91 is about not having fear, about having faith in God and His protection. “He is my refuge and my fortress, my God, in whom I trust,” it reads.

Time and again, Bautista’s faith has been a source of energy and strength for her. When asked how she sets up and sustains these programs, she said, “Short answer: Jesus.”

“My faith has deepened as a result of my obedience,” she said. It’s an obedience to a calling from God that she feels to do the work she is doing.

“I find myself being more compelled to do things that I wouldn’t normally do from being in my safe Southern California bubble. Many of the people who know about the work that we do at Shear Love and Free Rain see it as brave. But I feel obedience is the biggest factor in why we do the work we do.”

Overcoming her fears and following her calling wasn’t easy though, she said. “I felt as though God was asking me to go for a long time, but my fears and insecurities were standing in the way and I wasn’t being obedient … Kind of like a parent who’s super annoyed with their teenage daughter who just won’t clean their room.

“Once I made the decision to actually leave, a huge weight was lifted off of me, and I felt as though God was pleased that I was finally listening. I feel like He let out a huge sigh of relief.”

From 2011 to 2014, Bautista spent most of her time on the move. During those years, she helped establish vocational skills programs in Uganda, Brazil, Mexico, India, Cambodia, and other countries throughout Southeast Asia.

“The countries that we’ve started programs in have all come to us,” she said. “We’ve been connected with them through friends or partners or social media, and they had a need that we could meet.”

She recalled a time in India that helped her decide to do this long-term rather than just making short trips to help.

She was walking through a red-light district one morning with one of her Shear Love colleagues. “As we walked through, we saw a 9-year-old girl being sold for sex by her father.”

“We knew right then that girl’s parents needed another way to provide for their family,” Bautista said. “Within about three years of doing this work short term, I realized that we wouldn’t truly see long-term effects unless someone was there long term.

“The other reason I finally decided to go was that every single time I came back from a short-term trip, I found myself counting down the days until I went back.”

She was in Cambodia when her best friend and Free Rain co-founder, Kaylie Housewright, told her it was “necessary” for Bautista to continue her work in Thailand. So Bautista went to Pattaya and never left.

A Joint United Nations Programme on HIV/AIDS (UNAIDS) reported in June that Thailand has about 145,000 sex workers.

It did a survey with sex workers in a few cities, including Pattaya, amid COVID-19 and found “91% of respondents became unemployed or lost their source of income following the start of the COVID-19 outbreak. Three quarters of the respondents could not make enough money to cover daily expenses and 66% could no longer cover the cost of housing.”

While Pattaya has an international reputation for its red light district, some officials have disputed it.

“There is no such thing as prostitution in Pattaya,” Apichai Krobpetch, the Pattaya police superintendent, said in 2017, according to the Bangkok Post.

Krobpetch said the estimated 27,000 sex workers in Pattaya reported on by British newspapers at the time was fabricated. “Where did they get the figure? … Anyone can make up this information.”

Surang Janyam, the director of Service Workers IN Group Foundation, also said the 27,000 figure was inaccurate—but his message was much different than Krobpetch’s. He said, according to the Bangkok Post, “27,000 sex workers in Pattaya is way too low. We have a lot more sex workers than that.”

Bautista says an estimated 85 percent of the 8 million tourists who visit Pattaya annually are there to purchase sex.

“Our outreach team is often propositioned by men,” she said. “Because of the reputation Pattaya has, this has been a continuous issue.”

During one evening recently, one of the team’s outreach leaders was “out meeting women and providing them with the opportunity to get out of their current situation with our help.”

“When she came back for debrief she said, ‘I don’t know which one was worse: the cockroach on my leg or the drunk 70-year-old man’s hand on my thigh.’”

“Sex trafficking and sexual exploitation are in the open,” Bautista said. “You can go into any bar, hotel, massage parlor, or most restaurants, and negotiate a price for sex with a man, woman, or transgender. While children are still kept hidden from the public eye, it’s still not hard to find a child that’s for sale.”

While there’s “no typical day in this line of work,” Bautista said, most days look something like this: at 10 a.m., “life skills” courses begin for beauty, barber, and sewing students.

Those skills include lessons in English, budgeting, business management, mentoring, counseling, and devotions. After a lunch break, vocational training courses run from 1 p.m. to 5 p.m.

Bautista has noticed some outstanding results.

“We’ve seen women take control of raising their own children. It is not often that we see young mothers caring for their own kids in Thailand. They often take their children up to the villages where they came from, and their parents raise them, while they come back down and work in the red light district to provide.”

Some students have gone on to open their own businesses. Others have returned to the red light district in order to empower other women and bring them out of the situation that they were once in.

“A key component in this work is that each one of us on our team knows that this is our purpose,” she said. “While passion fuels you, purpose sustains you.

“If you don’t have purpose in doing this work and know that Jesus has called you to this work, you’ll never last. That, paired with consistent counseling and mental health care, is vital to success in this field.”

While Bautista rarely misses the United States, she does wish she could see her nieces and nephews more often. (She also admits that she occasionally misses eating Chipotle.)

“I like to visit, but after about two weeks back, I’m itching to leave again,” she said. “I honestly don’t think I’ll ever move back to America. I believe God has me on the trajectory that He wants me on and I have committed to staying obedient to His call. Wherever it may be.”