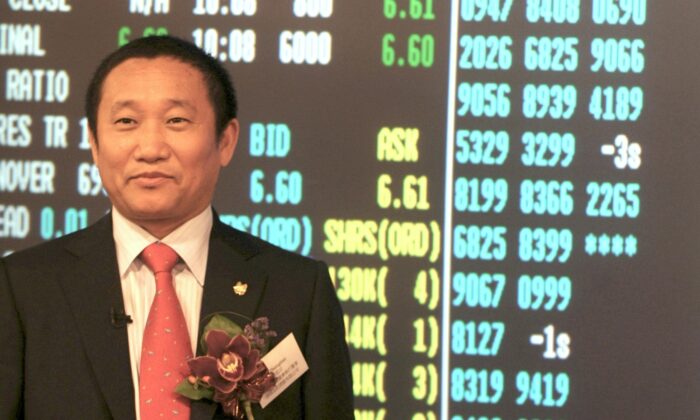 China Zhongwang Holdings Chairman Liu Zhongtian poses for pictures just after trading had started at the stock exchange in Hong Kong on May 8, 2009. (Mike Clarke/AFP via Getty Images)
Southern California

LOS ANGELES—A group of six Southern California businesses run by a fugitive Chinese billionaire was ordered on April 11 to pay $1.83 billion in restitution for scheming to evade payment of duties on imported aluminum products from China.

The companies participated in the scheme to disguise aluminum extrusions to look like pallets, which weren’t subject to anti-dumping duties imposed in 2011. They were simply spot-welded together so that they would appear in the shape of pallets, and stockpiled at four large warehouses, according to the U.S. Attorney’s Office.

At the conclusion of a nine-day trial in August 2021, a federal jury in Los Angeles found the companies guilty of one count of conspiracy, nine counts of wire fraud, and seven counts of passing false and fraudulent papers through a customhouse. The Perfectus Aluminium defendants also were found guilty of seven counts of international promotional money laundering.

“The Perfectus and Warehouse defendants were integral participants in this conspiracy,” prosecutors wrote in a sentencing memorandum. “Indeed, they existed only to perpetrate it.”

The vast majority of the pallets were imported through the ports of Los Angeles and Long Beach.

Zhongtian Liu, 58, a billionaire Chinese citizen who is a former Tustin resident, and the former president and former chairman of the board of China Zhongwang Holdings Ltd.—Asia’s largest manufacturer of aluminum extrusions—has yet to appear in court in the United States to face criminal charges.