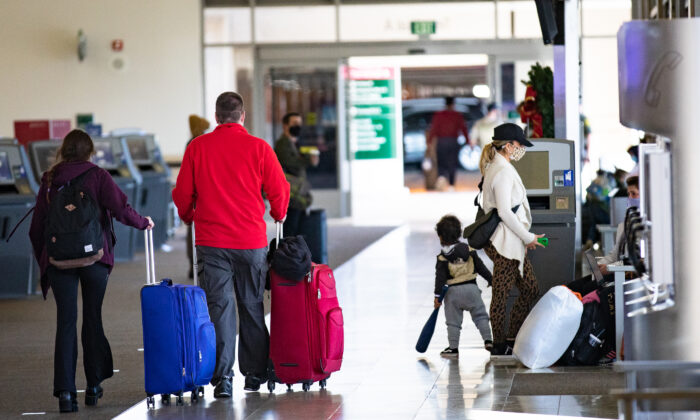 Travelers will no longer be required to wear masks at two major Southern California airports or on most of the region’s public transportation following a federal court decision voiding the COVID-19 mask mandate.

Ride-sharing services Uber and Lyft announced April 19 that they have also dropped the requirement.

Many airline passengers were eager to remove their masks following the announcements.

One Los Angeles man onboard a flight from Los Angeles International Airport (LAX) to London’s Heathrow Airport (LHR) said passengers cheered and removed masks on his flight after the rule ended.

“I’m writing this on a flight from LAX to LHR. As we’re taxiing on the runway at LAX, the pilot announced that the federal government has rescinded the mask mandate on airplanes. Everyone on the airplane cheered and took off their masks!” Armando Abarca wrote on Twitter on April 19.

The national mask mandate was declared unlawful by U.S. District Judge Kathryn Kimball Mizelle in Florida April 18, removing the restriction for millions of passengers across the country.

Shortly after the announcement, the Transportation Security Administration (TSA) and major airlines in the U.S. declared an end to their enforcement of the COVID-19-era requirement.

Travelers and visitors at LAX and John Wayne Airport in Orange County will still be encouraged to wear masks but officials have opted to drop the requirement.

“We are not enforcing a mask requirement neither is the TSA,” LAX Spokesman Heath Montgomery told The Epoch Times. “At the same time, we’re encouraging people to continue to wear them at the terminal and on our buses.”

The Centers for Disease Control and Prevention (CDC) continues to recommend people wear masks on public transportation but rescinded its mask mandate following a court order.

Passengers traveling through Orange County’s airport will be encouraged to wear a mask with traveling or working but it will be optional, according to the airport’s spokesperson.

“Masks are no longer required by TSA to be worn at John Wayne Airport,” Airport Spokeswoman AnnaSophia Servin told The Epoch Times. “Guests and employees will have the option to wear a mask during travel or while working.”

Travelers are still advised to check with their airline and destination airport for local policies, Servin said.

“We have up until today had a ‘No mask—No ride’ policy on our buses. That ended as of today,” Carpenter told The Epoch Times April 19. “We’re reminding passengers CDC still recommends wearing face coverings on transit to slow the spread of COVID-19 but we’re not requiring it anymore, or enforcing it either, with passengers or drivers.”

Since early in the COVID-19 pandemic, the transportation authority required face masks aboard its buses to slow the spread of the coronavirus, per federal guidelines.

More than 2 million masks were distributed throughout Orange County on OC buses during the mandate that started in January 2021, according to Carpenter.

“With more tools at our disposal to combat this virus, including wider availability of vaccines, tests, and therapeutics, the County can continue to progress towards its new normal,” First District Supervisor and Chair of the Metro Board Hilda L. Solis said in a release. “However, it is important to recognize that we still live in a pandemic, thus face masks will continue to be strongly recommended on public transit to keep ourselves and those around us safe.”

As of late Tuesday afternoon, the Los Angeles Department of Transportation was still asking passengers to wear masks on its DASH and Commuter Express buses, according to media reports. Some other city transit agencies were also still maintaining the requirements, including Torrance Transit, Culver City Bus, and Santa Monica Big Blue Bus.

The ride-hailing services Lyft and Uber have also dropped mask mandates for drivers and passengers.

Lyft lifted its mask rules for everyone in the car and said passengers would no longer be able to cancel rides on the app for these health and safety reasons.

Uber removed its requirement, allowing U.S. riders to go without face coverings in the front seat. The company will still give riders an option to cancel trips if they are uncomfortable with the removal of the mask mandate.

Walt Disney Co. also announced masks would be optional at its parks but recommended unvaccinated guests wear masks at its indoor and outdoor locations and transport facilities.