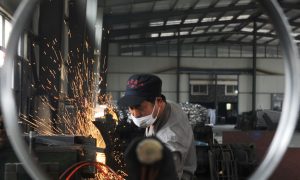 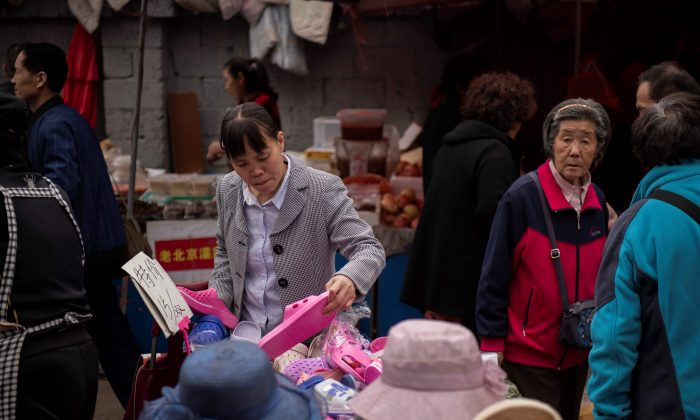 A woman looks at shoes at a market in Beijing on April 23, 2019. (Nicolas Asfouri/AFP/Getty Images)
China Business & Economy

The CBB research service conducted more than 4,000 interviews with firms and bankers on the ground in China to prepare its second-quarter preview. During the past three quarters, CBB data has bested Beijing’s official data in revealing the true picture of the Chinese economy as it struggles in the trade war with the United States. Official purchasing managers’ index (PMI) readings initially clashed with CBB’s numbers but then fell in line with them.

The narrative remains that there’s a pernicious side to every positive economic development in China. While manufacturing and retail carried the economy in the second quarter, inventories rose at a record pace, shadow banking (nontraditional lending) skyrocketed, and the gigantic service sector languished.

Shehzad Qazi, managing director of CBB International, expects another round of central bank stimulus if the economy weakens prior to the 70th anniversary of the People’s Republic of China.

Debt continues to increase, but the problem isn’t just its volume. It’s the growth of shadow lending, the diminishing utility of borrowing, and some of its purposes.

“Firms reported the highest share of shadow borrowing [45 percent] as a share of overall borrowing in survey history,” according to CBB. State-owned nonbanks are a major source of this shadow funding—coming at rates 6 percent higher than traditional bank loans on average.

Compared with 2016, borrowing is not spearheading a massive property and commodities rally. Now in 2019, with sky-high shadow lending, CBB’s leading indicators of capital expense (CapEx) and starts suggest a property slowdown may be coming, said Qazi.

He added that, in certain cases, the borrowing isn’t necessarily funneling productive activities. Copper and aluminum companies, with their ballooning inventories due to a deceleration in construction, are having to borrow to pay vendors since they aren’t paid by clients.

The borrowing of manufacturing firms appears to be to cushion further hits from the trade war. Manufacturing CapEx barely budged.

Firms With the Upper Hand

Among the many worries Chinese policy-makers face is the faltering service sector. As economies mature, the service sector tends to grow. With a growing middle-class population, households’ discretionary spending on services increases.

For the service sector, the PMI showed the slowest expansion in May since February. Borrowing hit a six-year high, but the sector still reported slower growth. Revenue, profits, CapEx, and volumes all fell from a year ago.

For the time being, firms are gaining at the expense of consumers but are set up for a fall due to excess supply.

With the easing of trade tensions at the start of 2019, the yuan strengthened into the 6.70 neighborhood. But with China disappointing the Trump administration at the negotiating table and with the renewal of tariffs, it weakened to above 6.90. The currency’s weakness was accompanied by a 13 percent plunge in the Shanghai Composite from April 19 to May 9.