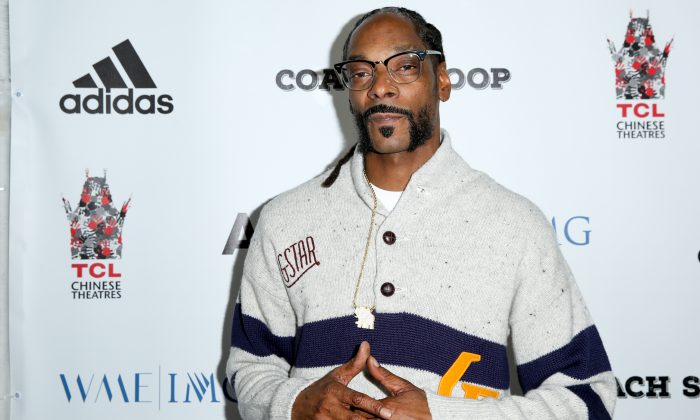 Snoop Dogg arrives at the LA Premiere of "Coach Snoop" at the TCL Chinese 6 Theatres in Los Angeles on May 16, 2016. (Rich Fury/Invision/AP)
Entertainment News

In December, Snoop’s attorney Lawrence E. Apolzon filed a trademark application on his behalf to use his stage name to sell hot dogs and other kinds of sausages under the brand “Snoop Doggs.”

As per the legal filing, Snoop, whose legal name is Calvin Broadus, would be selling “food including hot dogs, hot dog sausages, sausages, turkey sausages, and vegetarian sausages for consumption on or off the premises.”

While the 50-year-old rapper has not yet launched the brand, his legal team filed an intent-to-use application, and the accompanying application notes “serious intent,” Billboard reports, which suggests that he likely plans to do it, although the exact date is currently unknown.

The Epoch Times has contacted Snoop Dogg’s spokesperson for comment.

The reported business launch comes despite Snoop Dogg in 2016 admitting that he had never eaten a hot dog before.

During an appearance on Jimmy Kimmel Live!, when the rapper was shown a video of how hot dogs are made, he said “This is a hot dog!? Oh cuz, I ain’t never eating a [expletive] hot dog! If that’s how they make hot dogs, I don’t want one. I’m good.”

Snoop Dogg is no stranger to business ventures, having launched a cannabis company in 2015 called Leafs By Snoop which sold medical and recreational marijuana-related products.

The California native has also invested in a string of cannabis startups through his venture capital firm Casa Verde which focuses exclusively on the cannabis industry.

In June 2018, Casa Verde invested in the UK-based Oxford Cannabinoid Technologies (OCT), a biopharmaceutical company focused on researching the potential of cannabinoid-based medications to develop treatments to “improve the quality of life for millions of patients around the world.”

“We aim to create the gold standard in medical cannabis – from cultivation to commercialization, with IP ownership at every step in the value chain,” AceCann CEO Pedro Gomes said in a statement at the time. “With the support of our investors, we are able to accelerate our mission to develop consistent, high-quality products that give patients access to life-changing innovation.”

The rapper also ventured into the liquor industry in September 2020, when he announced a partnership with Trusted Spirits and Prestige Beverage Group to launch his own brand of gin which is “gluten-free, distilled five times and contains no added sugar” called Indoggo Gin.