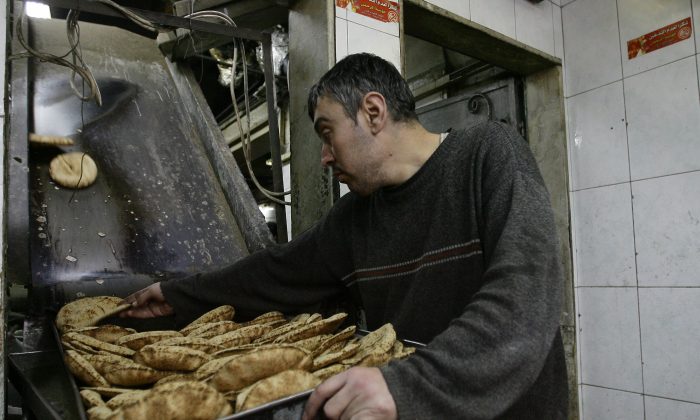 An employee puts pastries on a tray at a bakery in the Syrian capital Damascus on March 7, 2013. The nation's bakeries have lost a total of more than $3.5 million since the civil war began. (Louai Beshara/AFP/Getty Images)
Business & Economy

Snapshots of an Ailing Syrian Economy

The effects of the civil war that has plagued Syria for more than two years are seen in the number of dead (estimated at more than 70,000), in the number of refugees (more than one million), but also in the daily struggle of business owners trying to make it in a devastated economy.

NPR’s Deborah Amos published a report on May 5 about the iconic Bakdash ice cream parlor, a landmark in the Syrian capital of Damascus for more than a century. Bakdash opened a new location in Amman, Jordan, last week. It is now among the multitude of Syrian refugees in Jordan.

“It means there is no sense of security and safety in Damascus,” journalist Fahd al Kheytaan told Amos, “which forced the company to move some of its operation to Jordan.”

Juan Ricardo Cole, professor of history at the University of Michigan, compiled parts of articles from Syrian media showing the current economic plight in an April 9 blog post: On April 4, Al-Iqtisadi news magazine, reported that the Public Company for Bakeries incurred losses of $3.5 million (250 million Syrian pounds). The magazine also reported in April the “insane” price of chicken and beef. Vegetable prices were also high.

The World Bank noted the challenges Syria will face when and if the turmoil ceases: “Once the political situation stabilizes, Syria will grapple with immediate economic challenges including: output and employment collapse in the tradable sector; accelerated exchange rate depreciation in the parallel market; hoarding of hard foreign currency; likely foreign exchange reserve losses; rising inflation; and legal and financial issues associated with frozen assets.”