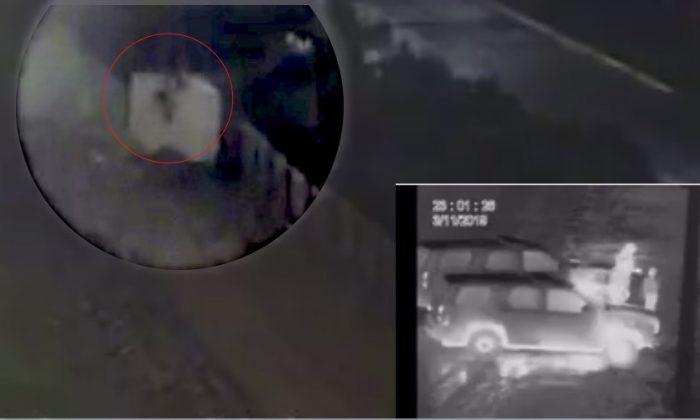 A smuggler used two young girls as decoys at the U.S.-Mexico border in California on March 12, allowing at least 10 people to cross illegally.

The unidentified smuggler dropped two girls from Salvador, ages 6 and 9, into concertina wire at an “aging” section of the border barrier, U.S. Customs and Border Protection in San Diego said Tuesday.

Video showed the girls being dropped from the wall into what CBP said was a bundle of concertina wire.

The federal law enforcement agency said the girls were given prompt medical attention.

“All 10 individuals got away,” CBP said.

Officials did not provide further details on the condition of the Salvadoran girls.

Meanwhile, in the morning hours of March 13, U.S. Border Patrol agents in the Rio Grande Valley apprehended the largest group of illegal aliens encountered in the area so far this year.

Federal agents working near Granjeno, Texas, responded to a report of a large group of people in the vicinity of the river levee suspected of trying to cross into the United States illegally.

“As agents responded, they observed hundreds of people consisting of family units and unaccompanied children cross the river levee,” CBP said in a statement. “Agents took 289 illegal aliens into custody and transported them to be processed.”

CPB noted in the release that in the month of February, border agents in the Rio Grande Valley Sector apprehended over 14,000 families and more than 2,900 unaccompanied children.

Border Patrol apprehensions of illegal aliens increased by nearly 440 percent in the El Paso Sector in the past four months compared to a year ago. Local Border Patrol officials believe the human smugglers and drug cartels are trying to overwhelm the authorities in order to get more contraband through.

The El Paso Sector, covering some 270 border miles in westernmost Texas and the whole stretch across New Mexico, used to be one of the least eventful. During the slow months of October 2011 to January 2012, it averaged about 20 apprehensions of illegal aliens a day—a rather light workload for an agent force of 2,400 (pdf).

Fast forward to those same months seven years later, and the workload has increased more than fourteenfold, while the workforce remains the same.

Most of the blame falls on human smugglers and drug cartels that “work hand in hand” and have moved their operations toward El Paso from south Texas, where increased Border Patrol presence starting a few years ago made their operations difficult, according to Ramiro Cordero, Border Patrol special operations supervisor in the El Paso Sector.

“They did start hitting us here in El Paso, I’m going to say about a year, year and a half ago, little by little,” he said in a Feb. 14 phone call.

Since the 2019 fiscal year started in October, however, the influx has intensified. Four months in, the nearly 35,000 apprehensions have already surpassed the number of apprehensions for the whole of fiscal 2018.

While most of the illegals try to cross in the El Paso metro area, large numbers have also started to show up further west, in the desert, Cordero said.

Since October, the agents caught 27 groups of more than 100—a total of about 5,500—in the area of Antelope Wells, a small port of entry in the desert some 31 miles east of the Arizona border.

“They think that by saturating our agents there … all of our attention is going to begin to focus on that,” Cordero said.

Multiple times in the past month, he said, agents have caught or detected narcotics smugglers trying to sneak in just as the agents are busy dealing with the illegal trespassers further down the border.