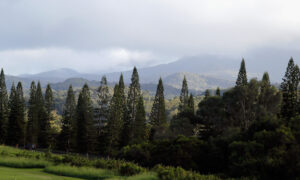 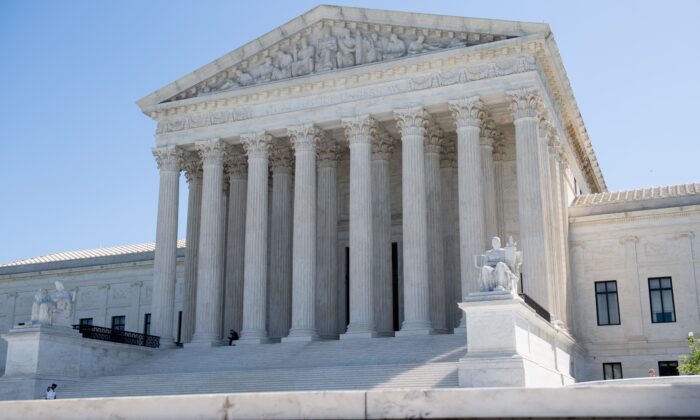 The U.S. Supreme Court is seen in Washington on May 4, 2020. (Saul Loeb/AFP via Getty Images)
US News

WASHINGTON—The first U.S. Supreme Court arguments conducted by teleconference—a break from tradition because of the COVID-19 pandemic—played out smoothly May 4 in a case involving the hotel reservation website Booking.com, with even the typically silent Justice Clarence Thomas joining the fray.

The pandemic has prompted changes at almost every level of U.S. society, with the nine justices holding arguments in the trademark case not in their courtroom but by participating remotely using a dial-in format to combat the pathogen’s spread.

The arguments began as usual with the marshal of the court’s traditional words, “Oyez, Oyez, Oyez,” and proceeded with Chief Justice John Roberts playing the role of a traffic cop. Thomas, who usually refrains from asking questions during arguments, posed two rounds of queries.

In another first, the court provided a live audio feed, making these the first arguments that the public could hear live.

The technical hiccups were brief, including moments when Roberts had to prompt liberal Justice Sonia Sotomayor and Justice Department lawyer Erica Ross a second time after short silences, suggesting they hadn’t unmuted their phones.

“I’m sorry, chief,” Sotomayor said, before launching into her questions.

Roberts directed which justice was up to ask questions and cut off lawyers when they went on too long, in an effort to keep the arguments close to the scheduled one-hour length. The arguments ran about 15 minutes over the allotted time.

Thomas, a conservative who is the court’s longest-serving justice, embraced the new format. Thomas last had asked a question in March 2019, which was three years after his previous one.

But Thomas queried both Ross, who explained why the U.S. Patent and Trademark Office wants to prevent Booking.com from trademarking the site’s name, and Lisa Blatt, the lawyer presenting the company, a unit of Norwalk, Connecticut-based Booking Holdings Inc.

For example, Thomas asked whether trademarking a website name would be similar to 1-800 toll-free telephone numbers, some of which have received trademarks.

The justices asked both sides tough questions. A number of them—conservatives and liberals—expressed concern that trademarking the name Booking.com would give the company monopoly power that could hurt business rivals as well as consumers.

The Patent and Trademark Office is appealing a lower court decision that had allowed the trademark because by adding “.com” to the generic word “booking” it became eligible for a trademark. The online reservation service filed several trademark applications in 2011 and 2012.

Booking.com, along with the rest of the travel industry, has been slammed by the pandemic, which has caused tourism and business travel to evaporate worldwide.

Several justices asked questions about handing companies an advantage over competitors through trademarks.

“You are seeking a degree of monopoly power that nobody could have had prior to the internet age,” conservative Justice Samuel Alito said.

A ‘Bridge Too Far’

Liberal Justice Elena Kagan, while sounding skeptical toward some of the company’s arguments, also wondered whether siding with the government and creating a rule barring protection for all generic website names is a “bridge too far.”

A Patent and Trademark Office tribunal in 2016 rejected the company’s trademark applications, concluding that the name Booking.com referred generically to the common meaning of booking lodging and transportation and couldn’t be used exclusively through federal trademark registration.

Under U.S. law, only terms that distinguish a particular product or service from others on the market can be trademarked.

Booking.com appealed, presenting a survey that showed that 74 percent of consumers identified Booking.com as a brand name. The Richmond, Virginia-based 4th U.S. Circuit Court of Appeals sided with the company in 2019.

The court has scheduled teleconference arguments in a total of 10 cases spanning this week and next week. The biggest ones are three that focus on the question of whether President Donald Trump can keep his financial records, including tax returns, secret. Those cases will be argued on May 12.

The Supreme Court building has been closed to the public since March 13 due to the pandemic. The justices have met only via teleconference, and have issued rulings only online.

The virus has proven to be particularly dangerous in older adults, especially those with underlying medical issues. Four of the nine justices are age 70 or older: Ruth Bader Ginsburg (87), Stephen Breyer (81), Thomas (71), and Alito (70).

By Lawrence Hurley & Andrew Chung. The Epoch Times contributed to this report.