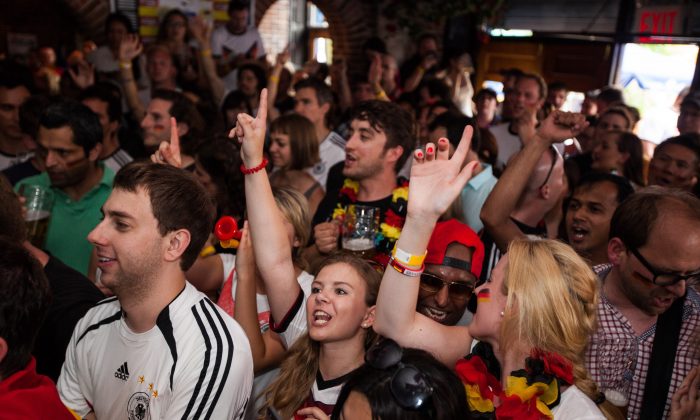 Smiles and Frowns in New York Over the World Cup Final

NEW YORK—Fans rooting for Germany and Argentina in the World Cup cheered for a full 112 minutes on Sunday. But then Germany scored the decisive goal, launching some crowds into celebration while casting palpable gloom over others.

The East Village Bavarian indoor beer house, Zum Schneider, was a venue for a lot of merriment when Germany won.

The venue was sold out in under two hours. The seating was limited so that fans could view the match in an authentic German atmosphere, Matheus, the bar manager, said.

Urging the crowd on with cowbells and guttural football chants, he soon had the audience cheering and issuing imaginary yellow cards as if they were on the touchline in Rio De Janeiro’s famous Maracana Stadium.

Decked out in their finest national team jerseys, Vanessa and Chantal Kranz said they’re used to watching Germany at large-scale public viewings in Bochum, Germany, where thousands of fans who couldn’t travel to the major tournaments gather.

Ann-Christin Goldberg, 21, wore a Michael Ballack jersey, in honour of the great German football pundit. She joined her group of friends, who hail from Berlin and Koln, to watch the game. They travelled from as far as New Jersey. They were relieved to see the ball ripple the net after Mario Götze’s extra-time shot.

Brandi Duy brought her infant son Otti, who was happy regardless of the score. Otti’s grandfather emigrated from Germany to Canada, ensuring that his son, and Otti’s father, was raised with a sense of German national pride. Brandi and Jeff Duy still remembers when previous German greats, such as Karl-Heinz Rummenigge, Jurgen Klinsmann, and Matthias Sammer, played in the West German colors.

Meanwhile at the Boca Juniors Argentinian Steakhouse in Queens, there was a palpable shift from jubilant suspense to grudging resignation when Germany scored the first and ultimately last goal.

George Ramirez, was relaxing in the pool of his Howard Beach home until he was compelled by his niece to join the fiery soccer fervor at the Boca Junior Argentine Steakhouse. The niece, Thalia Ramirez, proudly wore the jersey of the star Argentine forward, Lionel Messi.

“What’s the best thing about the Argentinean team? Everything!” she said.

As Germany’s victory became a reality, the crowd overflowing to the street outside Boca Juniors began to dissipate. Jennifer, a 42-year-old woman who only gave her first name, said that the once trumpeting horns of those draped in the blue and white of the Argentine flag sounded as deflated as the spirits of Argentina’s fans.

“The energy’s changed from jubilation to somber,” she said.