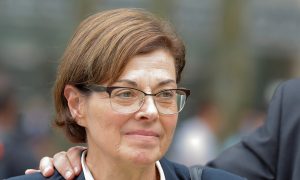 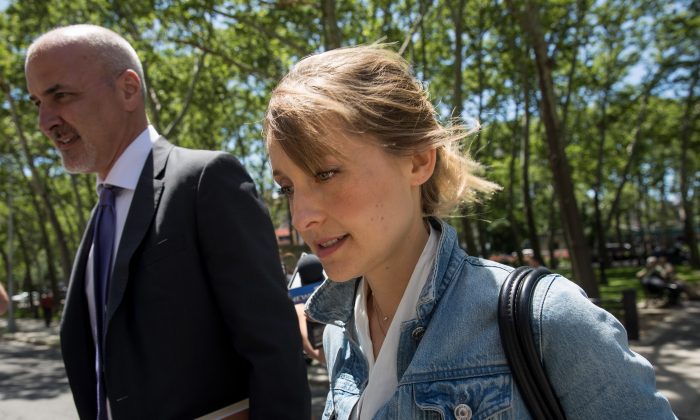 Actress Allison Mack arrives at the U.S. District Court for the Eastern District of New York for a status conference, June 12, 2018, in the Brooklyn borough of New York City. (Drew Angerer/Getty Images)
Crime and Incidents

A high-ranking member of NXIVM who was arrested in 2018 pleaded guilty on April 8 to blackmailing two women as part of her role in a secret society within the organization.

Mack allegedly recruited girls for a secret society founded by Keith Raniere within NXIVM, called DOS, or “The Vow,” around 2015. Prosecutors said the society is purported to be an acronym for the Latin phrase “dominus obsequious sororium,” which translates loosely as “master over the slave women.”

A spokesperson for the Eastern District Court told The Epoch Times that Mack now faces “up to 40 years in prison when she is sentenced.” Mack is scheduled to be sentenced on Sept. 11.

Fighting back tears in court, Mack said she had joined the organization, led by Raniere, a decade ago to find purpose in life.

“Through it all, I believed that Keith Raniere’s intentions were to help people,” she said. “I was wrong. I now realize that I and others engaged in criminal conduct.”

There was no mention at the plea hearing of any agreement by Mack to cooperate with prosecutors against Raniere, who is expected to go on trial later this month. Mack’s lawyers declined to provide any further details about her plea deal.

Raniere, 58, was arrested on sex trafficking charges in March 2018 and is being held without bail. Mack was arrested the following month.

Prosecutors say Raniere was the “highest master” of DOS and forced other members, all women, to have sex with him.

Many of the DOS members were branded with a cauterizing pen during a process that took “20 to 30 minutes.” The branding ceremony “involved slaves taking turns holding each other down while the branding was filmed.” The symbol itself was a combination of both Raniere’s initials (KR) and Mack’s (AM).

One of the plaintiffs said that, at some point, all the slaves directly under Mack “learned that Raniere was Mack’s master and their grandmaster.”

The plaintiff listed as “Jane Doe 1” in the court documents said that Mack “regularly required her slaves to pose for nude photographs, either as assignments or collateral.” Some of these photographs included close-up pictures of their private parts.

In March, prosecutors unsealed new charges accusing Raniere of sexually exploiting a minor and coercing her to produce child pornography.

Raniere has pleaded not guilty. Marc Agnifilo, one of his lawyers, declined to comment on the case after the April 8 hearing.

Agnifilo has previously said that his client’s sexual encounters with women in the organization were consensual, and denied the child pornography charges.

NXIVM on its website calls itself “a community guided by humanitarian principles that seek to empower people and answer important questions about what it means to be human.”

Also charged alongside Raniere are Seagram’s liquor heiress Clare Bronfman and NXIVM member Kathy Russell, who have pleaded not guilty.