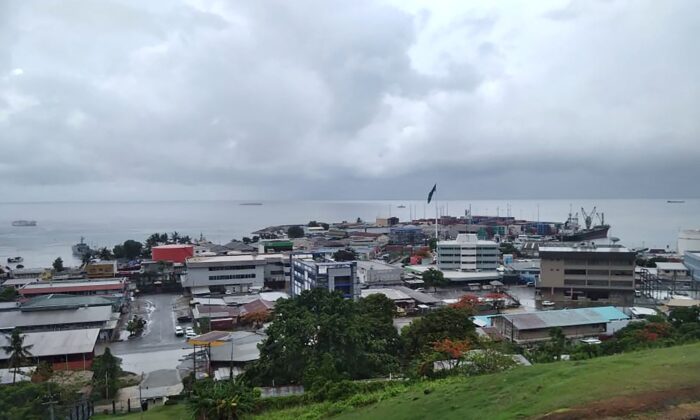 The streets of downtown Honiara, the capital of the Solomon Islands, on Dec. 6, 2021. The Island country has suspended all U.S. naval visits until further notice following an earlier incident on Aug. 23, 2022, when a U.S. Coast Guard vessel was denied permission for a scheduled port call. (Mavis Podokolo/AFP via Getty Images)
Thinking About China

Small States, and Seemingly Small Events, Are Key Indicators of US Power

Small states and their actions are key indicators of U.S. power. They allow Washington to perceive which way the geopolitical winds are blowing because small states get a vote regarding whether they seek to align with the United States or its enemy, communist China. Two recent events reveal that the evidence is mixed. That means the United States has considerable work to do to fight China globally, including in small states. They are often on the frontline of the Sino-American clash and must be supported when they resist China’s depredations.

In August, in a positive development, Estonia and Latvia joined Lithuania, which had left China’s 17+1 organization in 2021. China’s organization, labeled 16+1 after Vilnius’ departure, was to promote economic, political, and social ties between Beijing and the states of Europe. These brave states and frontline NATO members have shown that small states can check Beijing’s ambition and effort to undermine U.S. alliances.

By leaving China’s organization, they have established an ELL (Estonia, Latvia, and Lithuania) template for small state actions to resist the Chinese regime. Now they need to be joined by all other NATO members, including medium powers like Poland, to leave Beijing’s organization. In fact, no European state should be a member of this organization, given China’s human rights record, the genocide of Muslims in Xinjiang, and support for Russia’s war in Ukraine. The ELL template should serve as a guide for small- and medium-sized states to free themselves from China’s grasp and end cooperation with it, or as a caution not to fall under it in the first place—as Equatorial Guinea is in danger of doing.

Also, last month—half a world away—there was a negative indicator of U.S. power. The U.S. Coast Guard revealed that the Solomon Islands did not respond to U.S. Coast Guard cutter Oliver Henry‘s request for routine refueling and provisioning. The consequence was, in effect, denying a port visit to the ship. This unfortunate act reveals the deepening ties between Honiara and Beijing and its adverse consequences for U.S. interests in the region. Honiara replied to the U.S. government and international audiences that, in essence, the appropriate information was not sent to Prime Minister Manasseh Sogavare’s office. And by the time it was approved, the ship’s captain had decided to sail to another destination.

A related event happened about the same time with HMS Spey. According to the prime minister’s office, approval was aborted when the British High Commissioner in Honiara was no longer seeking approval for the port call. At the same time, Sogavare welcomed the hospital ship USNS Mercy, which was cooperating with the Solomon Islands’ Ministry of Health and Medical Services. Sogavare stated that the Solomon Islands would effectively like to place a hold on the visits by military vessels until a new mechanism is in place that will apply to all military vessels.

Only four months before, China and the Solomon Islands announced a security cooperation agreement that allowed Chinese port visits, logistical replenishments, and, importantly, for China to dispatch police or the military to protect its people or major projects.

The Chinese Communist Party’s (CCP) increasingly intimate relationship with Sogavare is an indication of changing alliance relationships—an indication of how quickly events in international politics can change in China’s favor, and how a camarilla may be relatively easily influenced by Beijing. It is also a warning to Canberra, Wellington, and Washington that they have thus far allowed CCP influence to grow without effective resistance in the region.

Unfortunately, the Solomon Islands is not alone. The CCP plans to refurbish and expand a runway on Canton Island in the archipelago country of Kiribati. Fiji, Papua New Guinea, Samoa, Vanuatu, and Tonga also are under Chinese pressure as Beijing labors to create a sphere of influence in Melanesia and Polynesia.

Estonia, Latvia, and Lithuania’s actions demonstrate that small states may resist China’s efforts to ensnare them in trade and cultural exchanges. Economic and cultural interactions are the thin edge of the wedge for greater influence in politics, economics, and society. In contrast, the alarming events in the Solomon Islands threaten the security of the U.S. homeland, U.S. territories like Guam, and U.S. allies. Honiara and the CCP’s expansion elsewhere in Melanesia and Polynesia show that small states may easily fall under China’s shadow and do so rapidly if there is insufficient attention and dexterity from Washington to anticipate and parry Beijing’s attempts.

Small states seldom take the lead on major national security issues, but they can sometimes. Estonia, Latvia, and Lithuania–hopefully soon joined by other small and medium-sized states—have demonstrated that states can check the CCP’s influence. They drew a line in the sand and took action against China’s metastatic expansion. These actions must be supported and touted by the United States as evidence of how to free a country from China’s influence. The ELL template needs to expand and serve as a guide for U.S. strategies to support small states worldwide.

The United States cannot be complacent. Its alliance networks and assumptions about perpetual support from small states are illusory. The Solomon Islands is a warning that the United States and its allies cannot make assumptions regarding its relations with small states. Even in countries like the Solomon Islands—where the United States expended so much blood and treasure in World War II, and where Washington continued its excellent ties to the country in the wake of the war—China can move quickly to create or seize opportunities. This is partly because the CCP can target the relatively small number of political leaders who determine the small state’s foreign and defense policies.

Fundamentally, the example of the Solomon Islands is that the United States has not entered the Sino-American fight to the degree that will be necessary to win it. It is time to bring the ELL template to the Solomon Islands and establish a network for the ELL leaders to explain to Honiara the costs of mortgaging its country’s future to China and how it can free itself.