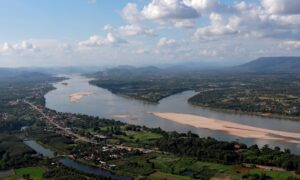 A pilot was taken to hospital with minor injuries after his small plane crashed when failing to take off from a busy highway in Russia‘s Chechnya on Monday (August 7).

Video filmed by a local resident captured the moment the single engine plane taxied on the ground and crashed into a van parked on the road side. A person can be seen jumping away and crawling on the ground in an attempt to escape being caught in the accident.

According to local traffic police, the driver of the damaged van was not inside at the moment of the crash.