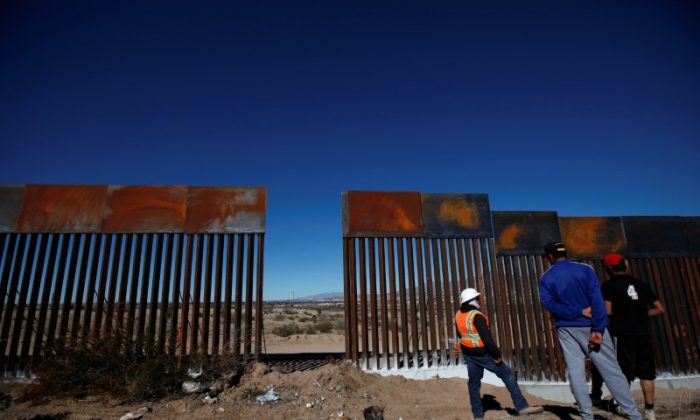 A worker chats with residents at a newly built section of the U.S.-Mexico border fence at Sunland Park, U.S. opposite the Mexican border city of Ciudad Juarez, Mexico on Jan. 26, 2017. (REUTERS/Jose Luis Gonzalez)
International

MEXICO CITY—Among the hundreds of companies expressing interest in helping to build U.S. President Donald Trump’s southern border wall, one four-member concern stands out: It is from Mexico.

Ecovelocity, based in the central city of Puebla, is betting it can provide cheap industrial LED lights for the project, which has sparked the ire of Mexicans.

Theodore Atalla, Ecovelocity’s owner, is an Egyptian native of Greek heritage who has made Mexico his home for most of the past two decades. He said his firm looked to undercut competition by providing lighting it imports mostly from China.

“It would only be on the Mexican side because I don’t think we would be allowed to work on the other side,” Atalla said in an interview. “They said they only wanted American products.”

Trump has vowed to start work quickly on the barrier along the nearly 2,000-mile U.S.-Mexico border to prevent illegal immigrants and drugs from crossing to the north. He has repeatedly said Mexico will pay for it, something the Mexican government has flatly said it will not do.

Parts of the border are already divided by high fences, and a huge part of the boundary runs along the Rio Grande river.

Some 640 firms, mostly from the United States, have put their names forward to participate in the design and construction of the wall, the U.S. government’s website for business opportunities shows.

Companies based in Spain, Germany, South Africa, Britain, Ireland, Puerto Rico and Canada are among others on the list.

Ecovelocity is the only one registered in Mexico, possibly a sign of the depth of feeling against the barrier south of the border, where there has been a surge in patriotism triggered by Trump’s repeated swipes at the country.

Mexico’s Cemex, one of the world’s largest cement producers, has said it is open to providing quotes to supply the raw materials for the border wall. Competitor Grupo Cementos de Chihuahua has also signaled a readiness to work on the project.

Both companies have a strong presence in the United States.

Atalla said public-sector corruption had made business tricky at times in Mexico, turning the Trump wall into a prospective growth opportunity for his firm.

“So I put my name on the list to see what happens,” he said.