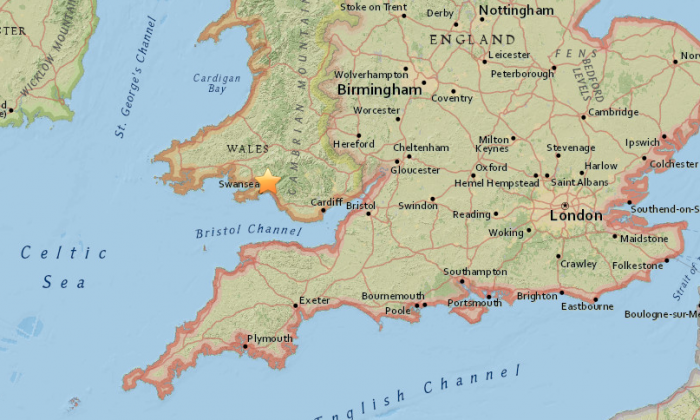 LONDON–Britain was hit by its biggest earthquake in a decade on Saturday, the British Geological Survey (BGS) said on Saturday, with tremors felt across parts of Wales and southwest England but no notable damage reported.

The BGS said the quake was of magnitude 4.4, with an epicenter 20 km (12.5 miles) north of the Welsh city of Swansea, adding that it was the biggest quake in the Britain since 2008.

A M4.8 #earthquake has just occurred northwest of #Cardiff. This is quite a sizeable earthquake by U.K. standards. #Neath #Swansea pic.twitter.com/WV1oYhU4X7

Earthquakes are not common in Britain and are rarely powerful. The 2008 quake in Market Rasen, north-east England, was magnitude 5.2 – 16 times more powerful than Saturday’s quake.

However, Saturday’s earthquake in Wales was felt as far away as Carisbrooke Castle on the Isle of Wight, over 200 km (125 miles) away.

Latest update of the effects of the #earthquake in #Swansea region. Was felt up to 300 km from epicentre pic.twitter.com/Ym38rIbAZB

Videos on social media showed people gathered outside Swansea University, which was holding an open day, after an apparent evacuation.

“Thank you to everyone who attended our visit day. We hoped that you had a surprisingly ‘earth moving’ experience!” Swansea University said on Twitter.