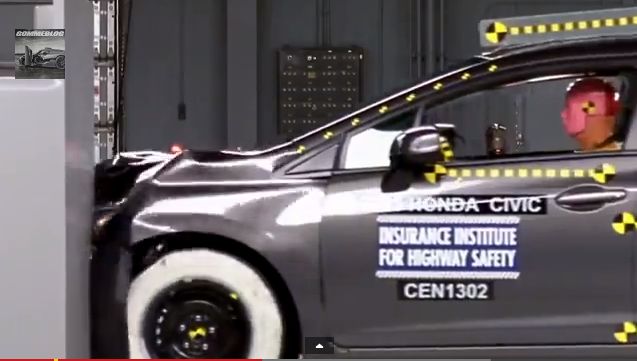 An Insurance Institute for Highway Safety crash test of the Honda Civic, after which the institute gave the Civic the highest rating for safety. (Screenshot/YouTube)
Autos

The Insurance Institute for Highway Safety (IIHS) released results of crash tests on Wednesday that evaluate vehicles in the type of frontal collision that accounts for 25 percent of all fatal or serious injuries in car accidents.

The small overlap frontal crash is when a car’s front end hits a hard barrier, but only a portion of the front end hits, causing the impact to be off-center. This causes a dangerous movement of the vehicle and passengers inside, explained David Zuby, chief research officer for IIHS, in a video uploaded by IIHS to YouTube. (See video below)

Honda Civics, both 2-door and 4-door, had the “highest rating of good” in a test of 12 popular small cars, Zuby said. The side airbag deployed in a timely manner, which is key in preventing injury for these types of collisions, he explained.

The Kia Forte was the worst. Zuby described the “horrendous collapse of the occupant compartment.” The airbag deployed, but the instability of the steering column allowed the column to shift out of place thus moving the airbag from where it needs to be. The side curtain airbag deployed, but not in time and it wasn’t big enough.

In a test of small SUVs in small overlap frontal collisions, the Subaru Forester and Mitsubishi Outlander Sport held up the best. The effective deployment of the side curtain airbag was also key in the Forester’s success. The Nissan Rogue did poorly. The side curtain airbag did not deploy.