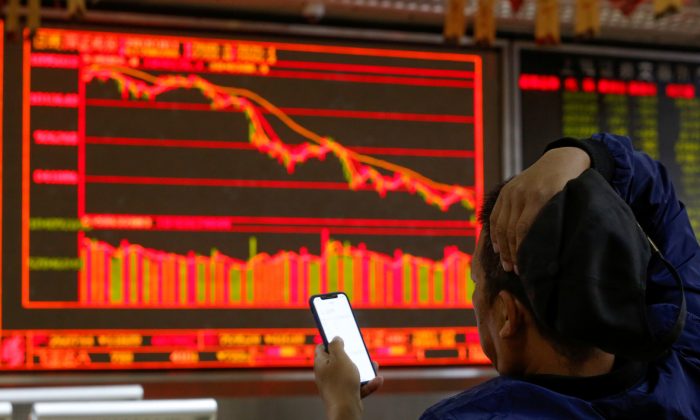 An investor sits in front of displays showing stock information at a brokerage office in Beijing on Oct. 11, 2018. (Thomas Peter/Reuters)
China Business & Economy

SHANGHAI —China is struggling to restore confidence in its stock markets, which are being weighed down by a massive amount of shares that have been pledged as collateral as credit-starved companies seek to raise funds.

Analysts say the practice, which involves 10 percent of total outstanding shares, is a minefield for an economy already battling slowing growth and a trade war with the United States.

Tight credit markets in China means that many companies, especially small and medium-sized enterprises, have scarce recourse to banks or other sources of financing, and policymakers have yet to promise any actual money.

Many of those companies have turned to pledging shares to finance companies as a way of raising cash.

“Using pledged shares to borrow has become a very popular, and very important funding tool,” said Wang Jin, a Shanghai-based lawyer who is dealing with an increasing number of disputes involving collateralized loans.

About $620 billion worth of Chinese shares currently trading on Chinese markets have been pledged, mostly by small and medium-sized companies. The practice boomed in 2016 and 2017 as Beijing started weaning companies off borrowing in the shadow banking sector.

But now, the nearly 20 percent slump in the broader market this year has triggered margin calls, forced liquidations, ownership changes, business disruptions and bond defaults for hundreds of listed firms.

Forced liquidations have a disastrous effect on companies involved, said Wang, a partner at Hiways Law Firm. “The impact to the real economy would be even bigger if the contagion spreads to affiliates and other businesses along the value chain,” he said.

During the market slump of 2015-16, over 1,000 companies suspended share trading to avoid margin call risks. But regulators have now tightened rules for share suspension, giving no buffer to listed firms facing risks of forced liquidations.

That means the private sector, which drives half the economy and generates the bulk of jobs, is going to face huge funding problems, unless Beijing steps in with state money.

Beijing threw money at the problem in 2015, even asking state-owned funds to buy shares. Now, it is asking private sector funds to help these companies.

On Wednesday, however, markets moved lower as investor worries returned.

The most concrete measure announced so far to address the market fears has been an asset management scheme unveiled Monday by an industry association that targets struggling listed firms. But the initial 21 billion yuan ($3 billion) commitment from 11 brokerages pales in comparison to the nearly 3 trillion yuan worth of pledged shares that some estimate face margin calls.

“There aren’t concrete policy measures being rolled out, and no new money is promised,” said Hong Hao, chief strategist at BOCOM International.

The widespread practice of borrowing against share holdings has led to shares of 724 out of 734 companies listed on China’s start-up ChiNext board being pledged for loans. By mid-2018, 16 percent of Chinese domestic A-shares were pledged on average, compared with 10.3 percent in mid-2015, according to Evergrande Research Institute.

Many analysts suspect that government rhetoric will only delay, but not defuse, the implosion of the massive “pledged shares” minefield among smaller companies—one of the biggest woes plaguing China’s stock market.

“Risk (is) under control, with the exception of some small-to-mid caps,” wrote Gao Ting, Head of China Strategy at UBS Securities, on Monday.

As of Oct. 9, the shares of 780 companies had fallen below the alert level—where the value erosion in pledged shares would require borrowers to put up more collateral—and 594 companies triggered margin calls, putting them at risk of forced liquidation, according to an estimate by Chinese brokerage TF Securities.

The funding stress is reshaping corporate share structures, with the number of share ownership transfer deals jumping 51.3 percent during the first nine months to 348, according to Huatai Securities.

“The stock market drop this time is affecting operations of many listed companies, at a time when economic prospects are not good,” Tan said.

The private sector’s role in mainland China cannot be overstated. According to Vice Premier Liu, the sector contributes 50 percent of tax, over 60 percent of GDP, over 80 percent of urban employment and over 90 percent of newly-created jobs.

Zendai’s Tan said his group has no plans yet to answer the government’s call to rescue struggling listed firms partly because the worsening economic environment is disrupting existing valuation models, and there is no guarantee that investing now would be eventually profitable.