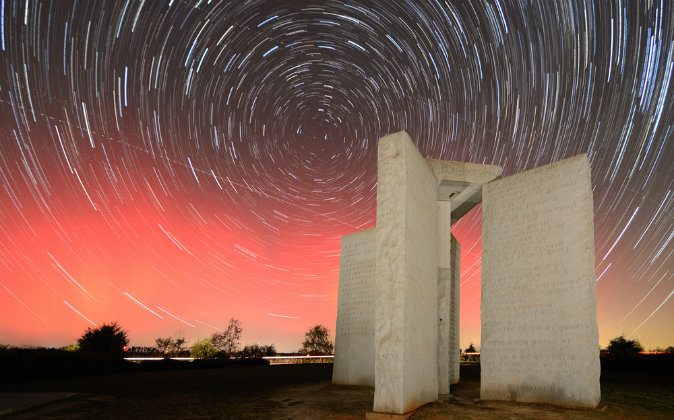 The Georgia Guidestones in Elberton, Georgia. (Shutterstock*)
Beyond Science

Slabs of Granite in Rural America Give 10 New Commandments

A look at the Georgia Guidestones
By Tara MacIsaac

Six slabs of granite stand tall in the rural south, inscribed with four ancient languages: Babylonian cuneiform, classical Greek, Sanskrit, and Egyptian hieroglyphics. The slabs themselves are of modern design, though the identity of the person who commissioned them has been deliberately kept secret and the meaning of the inscriptions has been much debated.

When translated, the slabs’ inscription declares: “Let these be Guidestones to an Age of Reason.”

The guiding principles laid out are as follows, according to Smithsonian:

1. Maintain humanity under 500,000,000 in perpetual balance with nature.
2. Guide reproduction wisely—improving fitness and diversity.
3. Unite humanity with a living new language.
4. Rule passion—faith—tradition—and all things with tempered reason.
5. Protect people and nations with fair laws and just courts.
6. Let all nations rule internally resolving external disputes in a world court.
7. Avoid petty laws and useless officials.
8. Balance personal rights with social duties.
9. Prize truth—beauty—love—seeking harmony with the infinite.
10. Be not a cancer on the earth—Leave room for nature—Leave room for nature.

The person who commissioned the slabs in 1979 is known only by the name R.C. Christian. Only one man alive still knows who this person was and he won’t talk.

Banker Wyatt Martin, who was 82 when he spoke with Discovery Magazine September last year, promised to keep R.C. Christian’s secret: “They could put a gun to my head and kill me, I will never reveal his real name. In my age and my profession you stuck by a promise of confidentiality.”

Martin did say of Christian: “He always said if you want to keep people interested, you can let them know only so much.”

It was at the height of the Cold War, said Martin, and the principles were meant to provide an alternative way.

Van Smith of Arkansas has been vocal about his theories on the stones. He told Discovery Magazine: “The purpose of the monument’s ten edicts is to establish the groundwork for a totalitarian global government.”

He also noted that: “The proportions of the stones predict the exact height in feet of Dubai’s Burj Khalifa, now the world’s tallest building. Both the Guidestones and the Burj allude to the Tower of Babel.”

Some have said the “R.C.” in R.C. Christian may indicate that he belonged to the Rosicrucian European secret society, since a Rosicrucian text states: “The word R.C. should be their seal, mark and character.”

*Image of the Georgia Guidestones via Shutterstock