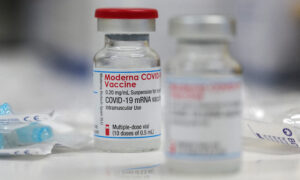 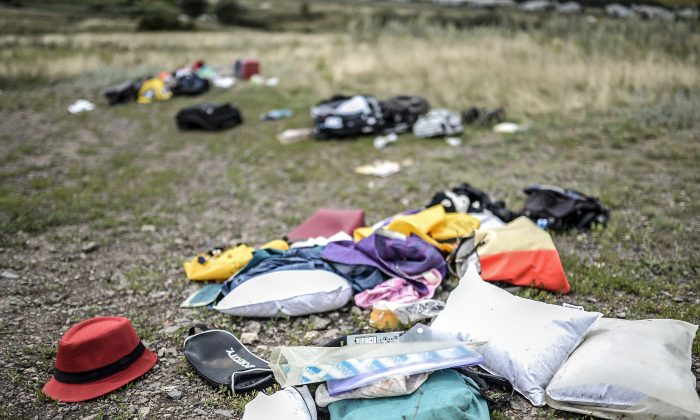 Belongings are scattered at the site of the crash of a Malaysia Airlines plane in Grabove, in rebel-held east Ukraine on July 20, 2014. The missile system used to shoot down a Malaysian airliner was handed to pro-Russian separatists in Ukraine by Moscow, the top US diplomat said Sunday. Outraged world leaders have demanded Russia's immediate cooperation in a prompt and independent probe into the shooting down on July 17 of flight MH17 with 298 people on board. (BULENT KILIC/AFP/Getty Images)
Europe

Brazier was at the crash site in Ukraine reporting on the recovery efforts, and he very briefly went through a victim’s luggage.

The Sky presenter quickly realized that his behavior was inappropriate, and dropped a bag he was holding, saying, “we really shouldn’t be doing this.”

Sky News has since apologized for the action in a statement:

“Today whilst presenting from the site of the MH17 air crash Colin Brazier reflected on the human tragedy of the event and showed audiences the content of one of the victims’ bags. Colin immediately recognized that this was inappropriate and said so on air. Both Colin and Sky News apologize profusely for any offense caused.”

Brazier later went on to describe the gruesome crash site scene before him.

“I’ve been walking around, coming across body parts all the time, many of them charred beyond recognition,” said Brazier.

“Very often you are looking at charred spines, that’s all that’s left.

“There are flies. It is hot. There are stretchers lying by the roadside. They have not been used because many of the bodies were dismembered by the forces of the impact.

“It is a truly macabre, horrific situation.

“There is a degree of anarchy and lawlessness,” he added.

Malaysia Airlines Flight MH17 was bound for Kuala Lumpur from Amsterdam when it was shot down by a surface-to-air missile while flying over Ukraine.

All 298 passengers and crew on board perished in the incident.

The perpetrators of the attack have yet to be confirmed, although the pro-Russian Donetsk People’s Republic militia and Russia are prime suspects.