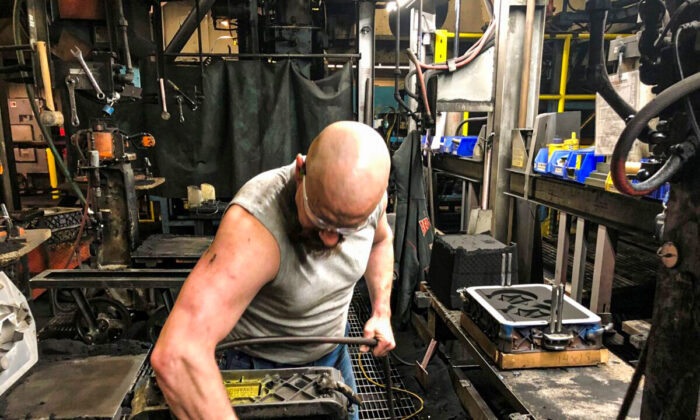 Red-hot inflation more than eroded the wage gains of Americans for the sixth month in a row in March, effectively giving a pay cut to many workers who saw their paychecks expand on paper, but shrink in real terms.

The Bureau of Labor Statistics (BLS) said in a recent statement that the average hourly earnings for all U.S. employees grew by 0.4 percent month-over-month in March in nominal terms. But when combined with the 1.2 percent pace of inflation in March, this means U.S. workers saw their real—or inflation-adjusted—hourly earnings drop by 0.8 percent.

March marked the sixth straight month of falling inflation-adjusted hourly earnings and the sharpest drop in the past year.

Over the course of the past 12 months, real average hourly earnings fell by 2.7 percent, a bigger decline than any pre-pandemic year in the past several decades.

Inflation ‘Eating Away’ at Wages

Surging inflation, which in March hit 1.2 percent month-over-month and 8.5 percent year-over-year, is to blame for the earnings haircut.

“Inflation is eating away the improvement in nominal wages, showing that businesses are hurting and margins weakening but more importantly that all-factor productivity growth is very poor,” Daniel Lacalle, chief economist at hedge fund Tressis, told The Epoch Times in an email.

Labor productivity in the United States has grown at a below-average rate since 2005, with BLS describing the tepid productivity growth of the past 15-plus years as a “dramatic reversal” of the above-average growth seen in the late 1990s and early 2000s.

BLS estimates a $10.9 trillion cumulative loss in output in the U.S. nonfarm business sector due to the productivity growth slowdown since 2005, or a loss of $95,000 in output per worker.

Economists have been grappling with the cause of the productivity growth slowdown, considering the impact of factors such as capital intensity and labor composition.

Still, it remains “the most profound economic mystery,” according to BLS, which stated in an analysis that “we still cannot fully explain what brought on this situation.”

On the inflation front, there’s some division among Federal Reserve officials as to whether it will be a recurring problem in the future that will require repeated rate hikes.

The Fed has embarked on a tightening cycle in a bid to cool inflationary pressures, and all of the central bank’s policymakers see the need to raise rates aggressively this year.

Federal Reserve Gov. Lael Brainard told The Wall Street Journal recently that she’s confident that “expeditiously” raising rates in a series of hikes, along with shrinking the Fed’s balance sheet, will bring inflation back down to about the 2 percent target.

But while Richmond Fed President Thomas Barkin agreed with Brainard on the near-term policy path, he said high inflation could become more common in the future, in part due to labor constraints from slowing population growth.

“Our efforts to stabilize inflation expectations could require periods where we tighten monetary policy more than has been our recent pattern,” Barkin said.

The New York Fed stated in its most recent survey of future inflation outlooks that U.S. consumers’ expectations for what inflation will be one year ahead have risen to 6.6 percent, the highest level in the history of the data series.

Rising inflation expectations carry the risk of an upward wage-price spiral, as the belief that prices will continue to rise can lead to higher salary demands, driving a kind of feedback loop reminiscent of the 1970s.