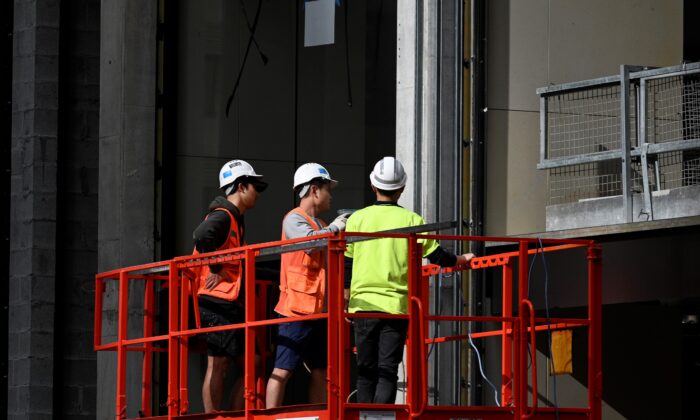 Labourers work at a construction site in the central business district of Sydney in Australia, on June 18, 2020. (Saeed Khan/AFP via Getty Images)
Australia

Recent research has found that many skilled migrants cannot find a job matching their skills as employers do not recognise their qualifications.

The finding comes as businesses in many sectors across Australia are wrestling with labour shortages, and the unemployment rate is at record lows.

Under the current federal migration policies, migrants are selected based on their credentials and skills, which are pegged to education levels and occupations.

However, a joint study by Flinders University and Charles Darwin University indicated that many Australian employers do not accept their qualifications.

The study interviewed skilled migrants in South Australia from India, the UK, China, Pakistan, Sri Lanka, Malaysia, Iran and the Philippines and found that migrants were most confused about the discrepancy between what the Australian government accepts in its migration program and what employers recognise.

“It’s not enough to have a stamp of approval. They also need work experience, which, as newly arriving migrants, is impossible. So they have to do additional training,” Cebulla said in comments obtained by AAP.

“The other conflicting message is from the industry where we hear about skills shortages.

In addition, the research found that many migrants had to work in jobs lower than their skill levels. This situation especially occurred in the fields of information and communications technology, business, human resources and marketing professions, causing an oversupply of labour in those areas.

Cebulla said that although there was a solid assessment for working visas in place, Australian employers still regarded migrants’ accredited qualifications as insufficient.

“When it comes to actually employing those migrants they’re calling for, they’re not fitting the job description,” she said.

“You end up with lots of highly qualified Uber drivers.”

The researcher also said that it was difficult to understand why people with TAFE qualifications in aged and disability care could not get a job despite high demand.

However, in some sectors, doing additional courses helped increase migrants’ chances of getting employment. For instance, a migrant with a computer science degree might be able to find a job in Australia after completing another TAFE course.

Meanwhile, many migrants did not know that their original qualifications in fields such as IT, business, education, engineering, science, law and health were unrecognised in Australia.

“People are not given this information before they arrive. They take any job, but it’s not a springboard,” Cebulla said.

“They are excluded from social welfare, but you’re basically telling them to go back to school,”

Half of Migrants Work Outside Their Expertise

Notably, nearly half of the surveyed migrants worked in occupations different from those nominated in their visa applications to make ends meet.

“I am finding difficulty in securing employment as a secondary school teacher,” a South African woman told researchers.

“I do relief teaching but cannot get consistent work. I, therefore, have to resort to being a personal carer to support my family.”

Furthermore, those with diplomas or post-graduate diplomas are more likely to find employment in their nominated occupation, especially in health. However, many migrants were found to be underemployed.

Regarding migrant demographics, the study found that men were more likely to get a job than women.

Age is another factor affecting migrants’ chances of employment, with those in their 20s most impacted because of a lack of work experience.

Additionally, those aged 40 or above were likely to be underutilised or unemployed.

“Ironically, having the right level of experience—which goes hand-in-hand with age—to be eligible for skilled migration to Australia can undermine one’s effort in getting their skills recognised,” Cebulla said.

“The young are too young, and the old are too old.”