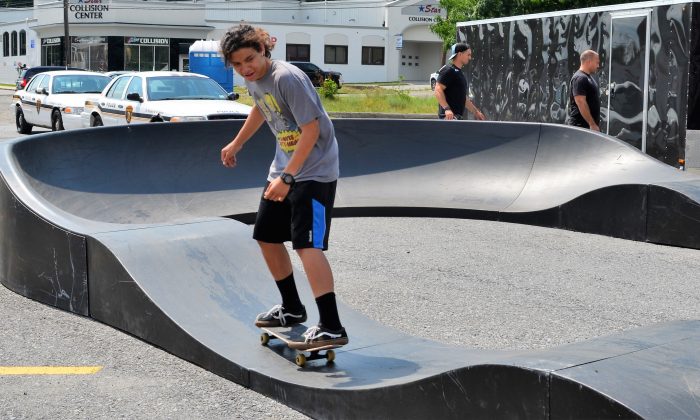 MIDDLETOWN—The American Ramp Company set up an all-wheel pump track in Middletown on July 13 for local residents of all ages and skill levels. Visitors with bikes, skateboards, and scooters came to test out the track set up in the lot where the city’s proposed skateboard park will be built.

Joseph Velaquez, 15, brought his skateboard. “I’m new at this,” he said, “but I really want to learn how to do it.”

His brother Joel Velaquez, 12, was testing the equipment with his scooter. “It’s nice. I like it,” he said.

A pump track is a continuous circuit of dirt rollers, berms, and jumps that loops back on itself, allowing users to move continuously.

Nathan Bemo, president of American Ramp Company, explained how the pumping action on the fiberglass composite track works. “Imagine you are on a bicycle. You only have to pedal a couple times to get your momentum. You use a pumping motion so you don’t have to pedal anymore and you can go faster and faster around it.”

Bemo said the event was to spread the word about pump tracks and “just to see how popular it is.”

This is something that could be added to [the skatepark].
— Christine Brinckerhoff, Superintendent of Recreation, City of Middletown

Bemo said his team is giving demos at over 100 places in the United States and Canada.

The track can handle skateboards, longboards, Strider bikes, mountain bikes, and bicycle motocross (BMX). “Basically anything with wheels can use it,” Bemo said. “A lot of cities that have a skatepark, this is something that they add to it. It just allows more users and diversity of riders to use it.”

Superintendent of Middletown Recreation, Christine Brinckerhoff said the city is reviewing three bids for the skatepark and will soon select a company, possibly by the end of the month.