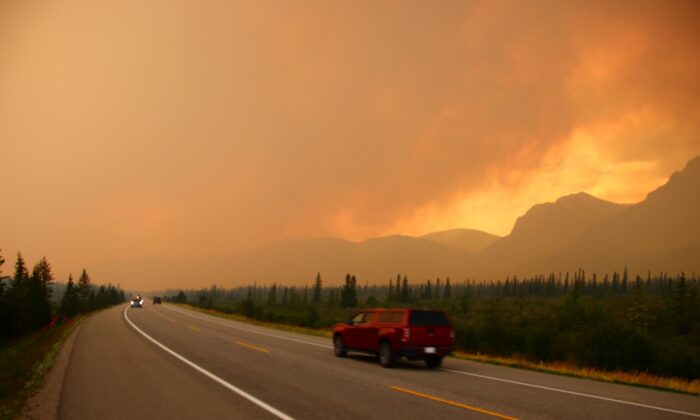 Smoke from the Chetamon Mountain wildfire in Alberta on Sept. 5, 2022. (Parks Canada)
Canada

The wildfire on Chetamon Mountain in Jasper National Park, Alberta, continues to burn through the forested area 15 kilometres north of the Jasper townsite.

Parks Canada says there is presently no threat of the fire harming the townsite itself, but restoring power to the municipality and the damage caused to the transmission line is a deepening concern.

All campsites in Jasper National Park have been closed and visitors are advised not to return until regular power has been restored.

ATCO, the electric company responsible for providing power in the community, estimated it would take weeks to repair the main power grid. On Sept. 8, ATCO announced that two-thirds of power had been restored to the Jasper townsite, but another outage occurred at 9:45 a.m. due to technical difficulties.

Mayor Richard Ireland said at a press conference that after power was restored to a “very large extent of the community,” it was lost across the entire townsite on the morning of Sept. 9 due to the “technical complexities of the system.” He said it appears power outages will continue for an indefinite period.

“Now is not the time to visit Jasper,” Ireland emphasized at the press conference. “We are far from over this emergency.”

He said it would be unkind to force visitors to leave the community, especially if they had travelled a long way and had plans like hotel bookings, but the municipality would continue to try and get the message out that visitors should avoid the area due to the struggle to conserve power.

“Focus and priority is to keep critical infrastructure running, so we can continue to provide water, wastewater and emergency services to the community. Without these services in place, we could not allow residents to remain in their homes,” the Municipality of Jasper said on its website on Sept. 8.

The municipality said its second priority they stated was restoring residents’ power.

“The town of Jasper continues to face the challenge of the total loss of transmitted grid power to the entire community,” the municipality said in a Facebook post on Sept. 9.

“The situation remains precarious. We anticipate that there will be intermittent outages over the next few weeks. These outages have impacted essential services including food supply and food service, and gas stations, which will continue to be limited as the power remains unstable.”

The municipality also warned that the fire could destroy more power lines or threaten the town in the absence of favourable weather. As of Sept. 7, there were 18 structures damaged along the power transmission line.

The Jasper Activity Centre in the townsite was opened for residents to get the latest information from ATCO, Parks Canada, and the municipality, charge up their devices, access microwave ovens, and have a hot shower.

On Sept. 6, Parks Canada announced that its latest assessment estimated the fire size to be 5,500 hectares, a reduction from its earlier estimate of 6,150 hectares.

Anne-Claude Pepin, the plans section chief on the Chetamon wildfire for Parks Canada, said at a press conference on Sept. 9 that the fire could increase in intensity with the weather conditions over the weekend but was confident that the proper strategies were in place to protect it from spreading to residential areas. She said 25 new firefighters joined the team to “ramp up” progress.

Parks Canada continues to issue warnings about drone activity in the area, saying it is dangerous for wildfire response teams. There is a $25,000 fine for anyone caught flying a drone in the region.

David Wagner
Follow
David Wagner is an Epoch Times reporter based in Winnipeg.