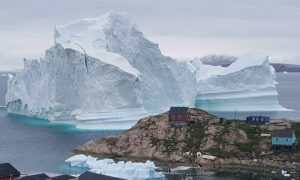 Why China Has Its Eyes Set on the Arctic
0 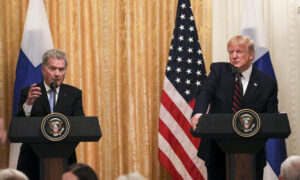 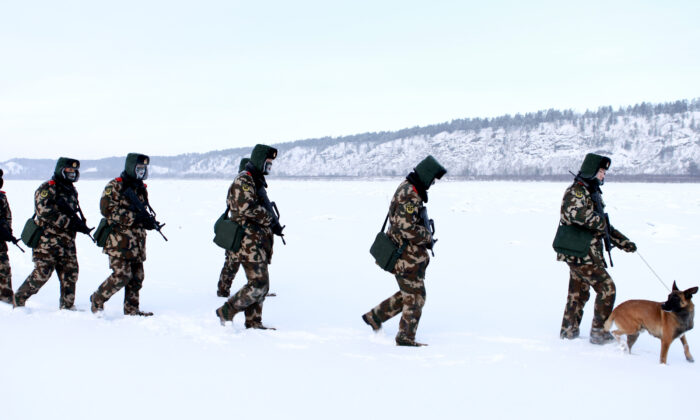 Chinese paramilitary police border guards train in the snow at Mohe County in China's northeast Heilongjiang Province, on the border with Russia, on Dec. 12, 2016. Mohe is the northernmost point in China, with a sub-arctic climate where border guards operate in temperatures as low as -36 degrees Celcius. (STR/AFP via Getty Images)
China-US News

The potential opening of an “Arctic Silk Road” due to melting sea ice between Asia and northern Europe is accelerating the geopolitical rivalry between China and the United States.

None of China’s coasts or island possessions border the Arctic Sea, nor does it claim to have sovereignty on continental shelves or water in the Arctic, but Chinese leader Xi Jinping in 2014 declared China a “Polar Power” as a “Near-Arctic State.”

Satellite weather observations over the last forty years reveal Antarctic sea ice has expanded; while Arctic sea ice has contracted. The combination of the average extent of Arctic sea ice at its lowest levels since 1850 and improving cold-water maritime technologies may lead to the opening of a Northern Sea Route from Shanghai to Rotterdam that would be 40 percent shorter than the traditional southern shipping route.

The Northern Sea Route would slash China’s 37-day average transit time in half, saving hundreds of thousands of dollars per voyage. But it would also allow China to radically transform the geopolitical playing field by avoiding transit through the Malacca Straits and Suez Canal that now serve as Western-dominated national security choke points.

Canada, Denmark (on behalf of itself, the Faeroe Islands, and Greenland), Finland, Iceland, Norway, Russia, Sweden, and the United States signed the Ottawa Declaration in 1996 to establish the Arctic Council as a high-level intergovernmental forum to promote Arctic cooperation for environmental protection and sustainable development. Shortly after Xi Jinping took power, China was approved as an “Observer” to the Arctic Council in 2013.

China published its “Arctic Policy” in January 2018 that states: “The utilization of sea routes and exploration and development of the resources in the Arctic may have a huge impact on the energy strategy and economic development of China.”

To wield greater influence along what it refers to as the 4,000-mile “Polar Silk Road,” China committed to funding major port and energy development infrastructure through expansion of its “One Belt, One Road” (OBOR, also known as Belt and Road Initiative). China stated that the investment is for economic purposes, but it can also host Chinese naval vessels when necessary.

China’s Arctic OBOR caused a major diplomatic confrontation with the United States last summer when Beijing’s state-owned China Communications Construction Company, which was once blacklisted by the World Bank, offered the autonomous Danish territory of Greenland to build three airports.

When President Trump responded in August by offering to buy Greenland from Denmark, the Wall Street Journal dismissed the move as his latest real estate development play. But western Greenland hosts Thule U.S. Air Force Base that is a cornerstone of America’s homeland defense. The base houses the Air Force’s 21st Space Wing that operates ballistic missile Early Warning Radar and manages space surveillance and satellite control.

Beijing and Moscow declared a “new era” of bilateral relations in December that listed energy, trade, technology, diplomacy and defense as areas targeted for deeper and broader cooperation. The announcement followed the completion and opening of the OBOR financed 15,000-mile “Power of Siberia” pipeline that began exports from Russia of 5 billion cubic meters of natural gas to China in 2020. The $55 billion pipeline is expected to scale up to 38 billion cubic meters annually by 2024.

Despite being warned by U.S. Secretary of the Treasury Jack Lew in 2014 that the financing would undermine Western sanctions against Russia’s invasion of the Crimea, the project was described by Russia’s Gazprom Energy as part of a OBOR $400 billion joint venture to develop Russia’s Yamal gas fields along Russia’s Arctic coast.

U.S. Secretary of State Mike Pompeo warned in May that China’s “aggressive behavior” risked creating a “new South China Sea,” where China is building military bases and harassing international shipping. Pompeo added that: “Just because the Arctic is a place of wilderness does not mean it should become a place of lawlessness.”