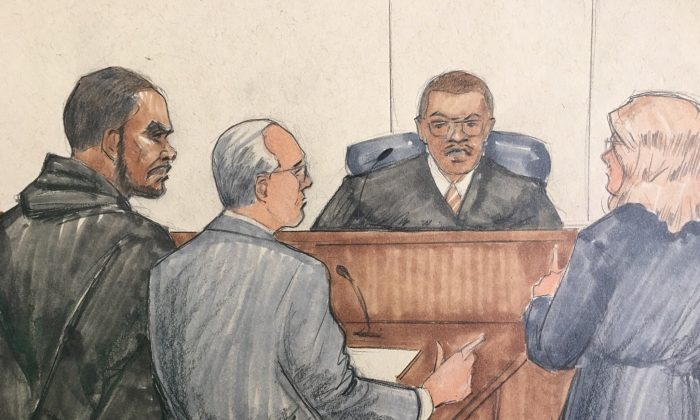 R&B star R. Kelly pleaded not guilty on Feb. 25 to multiple charges that he had sexually assaulted three teenage girls and a woman as the decades-old scrutiny surrounding the Grammy-award winning singer had a resurgence.

Kelly turned himself in to Chicago authorities on Feb. 22 after he was charged. He was held on a $1 million bond at a bail hearing on Feb. 23 but his attorney said Kelly didn’t have the $100,000 bail he needed to post. Chicago Police said Kelly was taken into custody after being indicted by a grand jury in Cook County.

The 52-year-old performer whose real name is Robert Kelly has faced years of sexual abuse allegations. He was charged under a 10-count indictment with sexually assaulting three teenagers, with each count carrying a maximum of 10 years in prison.

Kelly was dressed in an orange jail jumpsuit and spoke only to confirm his name when he appeared before Cook County Judge Lawrence Flood. His lawyer, Steven Greenberg, entered a not guilty plea on Kelly’s behalf.

Prosecutors say the victims include a teenager Kelly met when she sought an autograph during his previous trial on child pornography charges, another he met at her 16th-birthday party, and his hairdresser, who was then 24 years old. The singer was acquitted of the pornography charges.

A fourth charge is based on video footage that purportedly shows Kelly and a 14-year-old girl engaged in sexual acts, according to prosecutors.

Michael Avenatti, a lawyer representing two accusers, told reporters after the Feb. 25 hearing that he had turned over a second videotape to prosecutors earlier in the day.

The video was about 55 minutes long, dated from around 2000, and also showed a 14-year-old girl, though he did not make clear whether it was the same girl as in the first video.

The charges came just weeks after the Lifetime television network aired a six-hour documentary series entitled “Surviving R. Kelly” in which multiple women accused him of sexual misconduct and abuse. His next court appearance appearance was set for March 22.