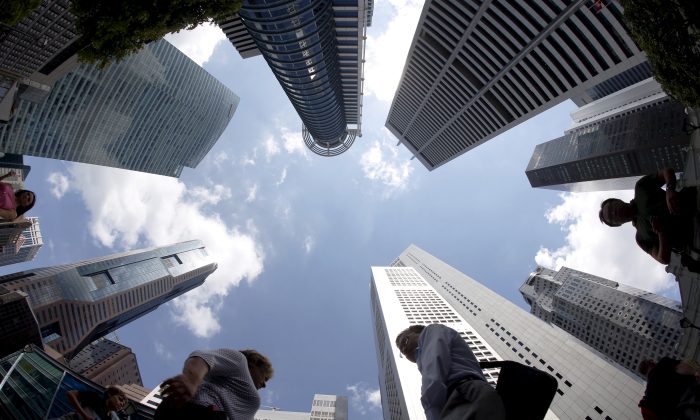 SINGAPORE/HONG KONG—Singapore has cautioned wealth managers against aggressively marketing their services or making other efforts to woo clients to the city state by capitalizing on rival Hong Kong’s political turmoil, people with knowledge of the matter said.

Officials from the Monetary Authority of Singapore (MAS) made the request last month to wealth managers, including DBS and a unit of Oversea-Chinese Banking Corp, the people said, declining to be identified given the sensitivity of the matter.

The central bank told bankers it wanted to ensure wealth managers in Singapore were sensitive to the situation in Hong Kong and did not design campaigns specifically targeting business from Hong Kong, the people said.

The move comes as Hong Kong has been thrown into turmoil by a proposed extradition bill—declared dead this week by its leader Carrie Lam—that for the first time would have allowed China to seek extraditions from the city, sparking demonstrations that attracted at least a million protesters.

Some tycoons in the Chinese-controlled territory have moved funds, or considered doing so, given provisions in the bill that would have allowed China to potentially freeze funds or other assets in the city.

The unrest has also encouraged some wealth managers to choose to set up in Singapore after also considering Hong Kong, the main offshore hubs for wealth management in Asia, Reuters has reported.

When asked for a comment for this story, MAS referred to comments last month by its managing director, Ravi Menon, that there were no signs of “any significant shift of business or funds” from Hong Kong to Singapore.

He had said that any upheaval in Hong Kong could actually be negative for Singapore.

It was not immediately clear how many banks had received the MAS guidance. Private banks routinely and legally help clients to move and manage their assets in different parts of the world.

“The message was that we shouldn’t be taking undue advantage of what’s going on in Hong Kong,” a senior banking source said on condition of anonymity.

“We have to act responsibly and not launch campaigns to convince clients that this is a good time for them to move their assets,” he said, adding he was not aware of any banks making a big push to get business from Hong Kong in the current climate.

“We are getting a lot of enquiries. What can we do if clients are looking to moving money here? We can’t stop the flows,” the Singapore-based banking source added.

Hong Kong and Singapore compete fiercely to be considered Asia’s premier financial center. Global private banks including Credit Suisse and UBS, as well as Asian wealth managers have their regional operations in the two hubs.

The riches held by Hong Kong’s tycoons have until now made the city the larger private wealth base, with 853 individuals worth more than $100 million—just over double the number in Singapore, according to a 2018 report from Credit Suisse.

Singaporean banks, including DBS and OCBC, have been rapidly expanding their businesses in Hong Kong and China over the past few years, and the Greater China region accounts for a significant portion of their revenue.

Like their global peers, Singaporean wealth managers also have Greater China desks in Singapore dedicated to clients in China, Hong Kong, and Taiwan and help them open bank accounts and set up family offices or trusts.

“The fact is that we are getting inquiries from clients in Hong Kong. They want to know how this will impact their assets and the Hong Kong markets,” an industry executive said.

“If they really want to move offshore, we have to help them with that,” the executive added.

By Anshuman Daga and Sumeet Chatterjee