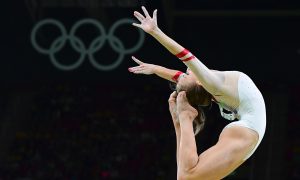 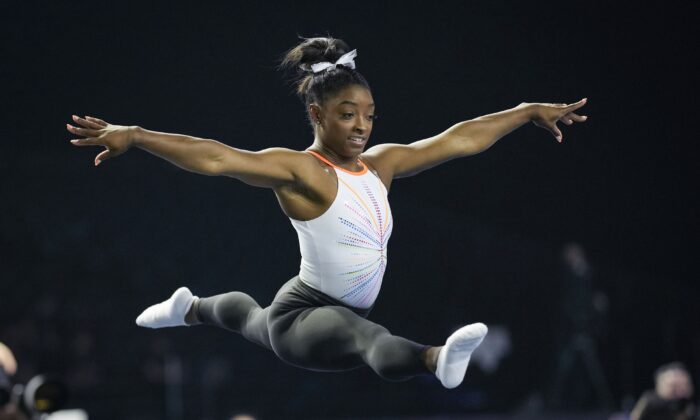 Simone Biles warms up before competing in the U.S. Classic gymnastics competition in Indianapolis, on May 22, 2021. (AJ Mast/AP Photo)
Sports

Four-time Olympic gymnastics champion Simone Biles became the first woman to land a Yurchenko double pike vault in competition at the U.S. Classic in Indianapolis on Saturday, while winning the all-around title in her first meet since October 2019.

Biles, who last competed at the 2019 World Championships, had an all-around score of 58.4 points and finished ahead of training partner Jordan Chiles, despite falling off the uneven bars on her final event.

For the Yurchenko double pike, Biles sprinted down the runway, did a roundoff onto the takeoff board, followed by a back handspring with a half-twist onto the vault before finishing it with a double somersault in a piked position.

“I was just thinking to do it like training, don’t try to overdo anything because I have a tendency as soon as I raise my hand to overpower things,” Biles told NBC Sports when asked about the vault.

The 24-year-old said was not happy that the International Gymnastics Federation gave a preliminary 6.6 difficulty score for the element.

Biles, who sported a rhinestone goat on the back of her white leotard on Saturday, also posted the highest scores on balance beam, floor exercise, and vault at the U.S. Classic, the first of three major competitions before the July 23-Aug. 8 Tokyo Summer Olympics.

She has won every meet she has entered since the 2013 U.S. Championships.