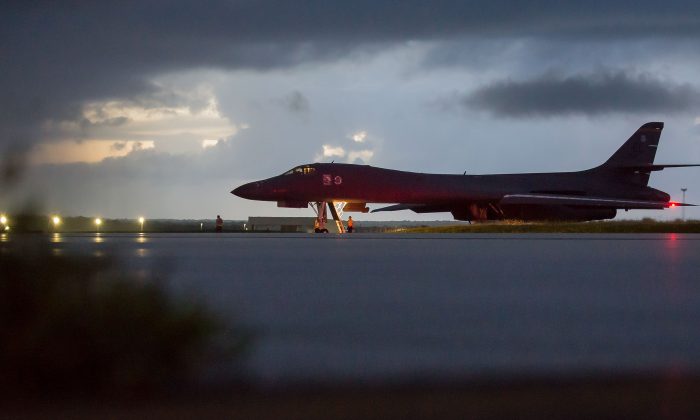 An Air Force B-1B Lancer assigned to the 37th Expeditionary Bomb Squadron prepares to take off from Andersen Air Force Base, Guam, on Sept. 23, 2017. (Staff Sgt. Joshua Smoot)
US News

Signs of Increased Preparedness of US Military Amid North Korea Threat

President Donald Trump has said that a denuclearized North Korea is the only option for the United States.

In an effort to get North Korea to abandon its Nuclear Weapons—something the regime has vowed not to do—the Trump administration is using diplomatic talks, economic sanctions, and the threat of military force.

“The president has been extremely clear on his perspective on North Korea. He’s not going to accept this regime threatening the United States with a nuclear weapon. He just won’t accept it,” National Security adviser H.R. McMaster said at the Foundation for Defense and Democracy on Oct. 19.

On Monday, the U.S. Air Force said it is making plans to put nuclear-armed B-52 bombers on 24-hour alert—a military move not seen since the end of the Cold War.

The preparations were revealed by Air Force chief of staff Gen. David Goldfein in an interview with Defense One. Goldfein stressed that the alert order had not been given, but that the Air Force was making preparations in anticipation that it might come.

Located around 2000 miles from North Korea, the Air Force base in Guam has a number of B1-B bombers stationed there, ready to take off on a moment’s notice. Just last week B-1B bombers accompanied by Japanese and South Korean fighter jets conducted drills over international waters off the Korean peninsula.

The United States has also increased its naval presence in the region. Two nuclear-powered submarines were deployed to the Korean Peninsula last week to join in military drills with South Korean forces. The USS Ronald Reagan, which carries 5,000 sailors and 90 fighter jets, is in the area for the war drills.

Defense Secretary Jim Mattis said on Oct. 9 that the U.S. military should be ready to respond to threats from North Korea.

Speaking at the annual meeting of the Association of the United States Army on Monday, Mattis said that the issue of North Korea is currently a diplomatic and economic one.

“It is right now a diplomatically led, economic-sanction-buttressed effort to try to turn North Korea off this path,” Mattis said in response to a question from the audience on what the U.S. military can do to prevent the likelihood of an armed conflict with the communist state.

However, Mattis stressed the importance of the U.S. military being ready for such a conflict should it arise.

“There’s one thing that the U.S. Army can do, and that is you’ve got to be ready to ensure that we have military options that our President can employ if needed,” Mattis said.

Army Chief of Staff Gen. Mark Milley said in response to Mattis’ comments that the Army has been tasked to prepare for war with North Korea.

“Secretary Mattis just yesterday very clearly tasked the United States Army to be ready. His words were carefully chosen,” Milley said. “So our No. 1 task, bar none, remains readiness. Readiness for what? It’s readiness for war.”

North Korea has responded to the war drills in its state media by threatening “a strike beyond imagination.”